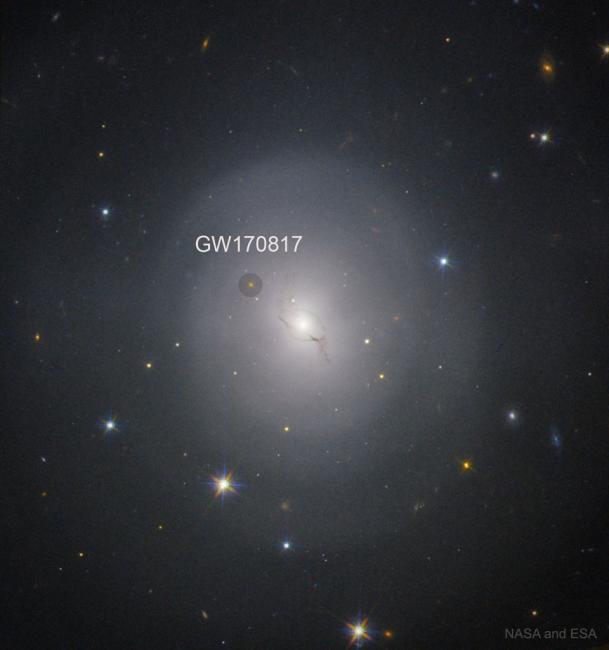 NGC4993, the galaxy hosting the gravitational wave event GW170817 that has been used to measure the age of the universe. The source of the event is the red dot to the upper left of the galaxy's center; it was not there in earlier images.

The direct detection of gravitational waves from at least five sources during the past two years offers spectacular confirmation of Einstein's model of gravity and space-time. Modeling of these events has also provided information on massive star formation, gamma-ray bursts, neutron star characteristics, and (for the first time) verification of theoretical ideas about how the very heavy elements, like gold, are produced.

Astronomers have now used a single gravitational wave event (GW170817) to measure the age of the universe. CfA astronomers Peter Blanchard, Tarreneh Eftekhari, Victoria Villar, and Peter Williams were members of a team of 1314 scientists from around the world who contributed to the detection of gravitational waves from a merging pair of binary neutron stars, followed by the detection of gamma-rays, and then the identification of the origin of the cataclysm in a source in the galaxy NGC4993 spotted in images taken with various time delays at wavelengths from the X-ray to the radio.

An analysis of the gravitational waves from this event infers their intrinsic strength. The observed strength is less, implying (because the strength diminishes with distance from the source) that the source is about 140 million light-years away. NGC4993, its host galaxy, has an outward velocity due to the expansion of the universe that can be measured from its spectral lines. Knowing how far away it is and how fast the galaxy is moving from us allows scientists to calculate the time since the expansion began – the age of the universe: between about 11.9 and 15.7 billion years given the experimental uncertainties.

The age derived from this single event is consistent with estimates from decades of observations relying on statistical methods using two other sources: the cosmic microwave background radiation (CMBR) and the motions of galaxies. The former relies on mapping the very faint distribution of light dating from a time about four hundred thousand years after the big bang; the latter involves a statistical analysis of the distances and motions of tens of thousands of galaxies in relatively recent times. The fact that this one single gravitational-wave event was able to determine an age for the universe is remarkable, and not possible with every gravity wave detection. In this case there was an optical identification of the source (so that a velocity could be measured) and the source was neither too distant or too faint. With a large statistical sample of gravitational wave events of all types, the current range of values for the age will narrow.

The new result is intriguing for another reason. Although both the CMBR and the galaxy measurements are each quite precise, they seem to disagree with each other at roughly the ten percent level. This disagreement could just be observational error, but some astronomers suspect it might be a real difference reflecting something currently missing from our picture of the cosmic expansion process, perhaps connected with the fact that the CMBR arises from a vastly different epoch of cosmic time than does the galaxy data. This third method, gravitational wave events, may help solve the puzzle.