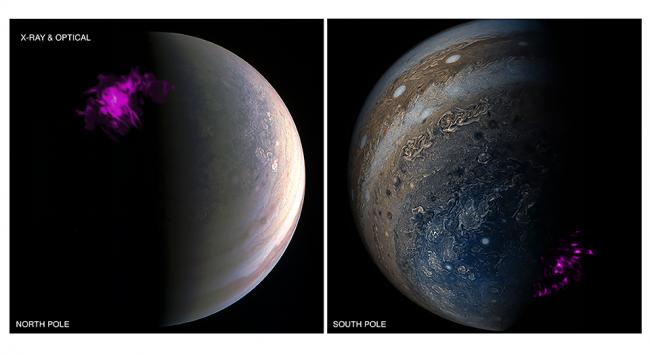 New X-ray observations show the that auroras on Jupiter behave differently at each pole. Astronomers using data from the Chandra and XMM missions have obtained the first X-ray images of Jupiter's south pole aurora and discovered that, contrary to expectations, it is unlike its northern counterpart.

Aurorae are seen in all of the planets in our solar system that have magnetic fields, including of course the Earth, and have even been detected around brown dwarf stars (known for having strong magnetic fields in their upper layers). Only Jupiter's north pole aurora, however, has been spatially resolved in X-rays, and the bright hot spot is seen to pulse as charged particles around Jupiter, funneled by the magnetic field lines, smash into atoms in the atmosphere and emit bursts of X-rays. Surprisingly, however, no similar aurora had been clearly identified from Jupiter's south pole, although they had been expected assuming Jupiter’s magnetic field lines connected north and south polar regions (like the Earth's are connected).

CfA astronomers William Dunn and Ralph Kraft and a team of colleagues now report clearly identifying Jupiter’s southern X-ray aurora. The scientists used data from the Chandra X-ray Observatory and XMM-Newton missions from 2007 and 2016, when the Jupiter’s south pole was suitably oriented toward Earth. Jupiter's aurorae are complex. The visible ones result primarily from the excitation of hydrogen atoms and make it appear pinkish-purple, but the moon Io injects a large amount of volcanic material into Jupiter's environment which leads to the production of X-ray emission. The several sources of activity make Jupiter's aurorae the brightest in the solar system.

In contrast, the X-ray emission from the polar regions is much more variable and confined, and less well understood. The new results find, for example, that the periodic brightening occurs at different rates in the north and south, in contrast to the current models which expect that the magnetic processes are coherent. In fact, the south appears to host a persistent X-ray hot spot. The implications are that the physical processes at work are different and more complex than the solar wind effects that produce the Earth’s aurorae.