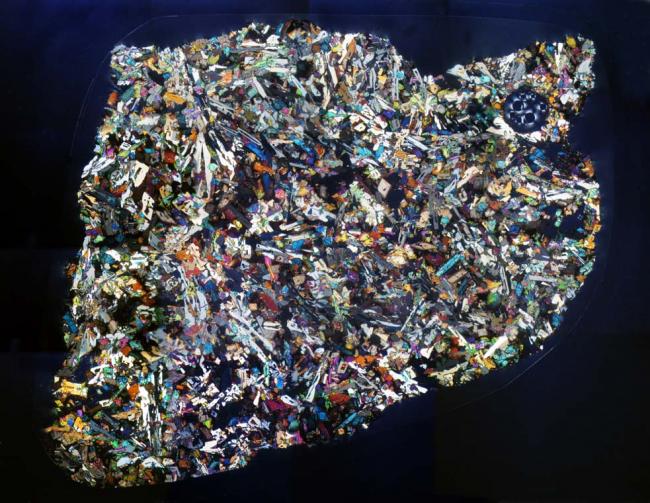 A photograph of an angrite meteorite, a class of very old and pristine meteorites dating from the formation of the solar system. New measurements of the magnetic field strength in angrite samples find it to be very weak, implying that the field, and the solar nebula itself, had dispersed by about 4 million years after the nebula’s formation. The result helps to constrain the time available for planets to form.

Very young stars host gaseous nebulae and protoplanetary disks where planetary systems form. The lifetimes of these disks place important constraints on the timescale of the planet formation, including the final sizes and eccentricities of the rocky terrestrial planets, and so it is a key parameter in the models. Observations of nearby young stellar objects suggest the timescales are typically short, under five million years, but such brief times are surprising because they would require very efficient mechanism(s) to transport material and disperse the disk. How they work is uncertain.

The evolution and dispersal of the gaseous nebula are closely connected to the nebula's magnetic fields. The magnetic fields transport angular momentum, driving disk accretion onto the central star. These processes also determine the structure of the solar nebula, as well as level of disk turbulence, and strongly affect many stages of planet formation. Information about the nebula's magnetic fields may be preserved in solid inclusions, the building blocks of planets and asteroids, and retrieved by analyzing certain types of meteorites, thus placing constraints on the lifetime of the solar nebula.

Angrites are among the oldest and most pristine known samples from meteorites, having cooled rapidly after the solar system was formed. They contain ferromagnetic grains that should have acquired a permanent magnetization if a magnetic field was present when they solidified, and so can be used to obtain direct, precisely dated measurements of the nebular field strength in the terrestrial planet–forming region. CfA astronomer Xue-Ning Bai and colleagues analyzed three samples of angrites and discovered that their magnetic fields were very weak, implying that at the time they formed the solar nebular field had dropped to less than 10% of its initial value (the latter determined from different meteoritic samples). The formation of the solar nebula is dated to be 4567.30 (+- 0.16) million years ago based on the crystallization of minerals in certain meteorites. Radioactive dating of the angrites finds them to have an age of 4563.5 (+-0.1) million years ago, implying that the magnetic field – and probably the nebula itself – dissipated in under 4 million years. This important result thus sets the key time scale for planet formation and migration in our solar system.

Mars as a Base for Asteroid Exploration and Mining