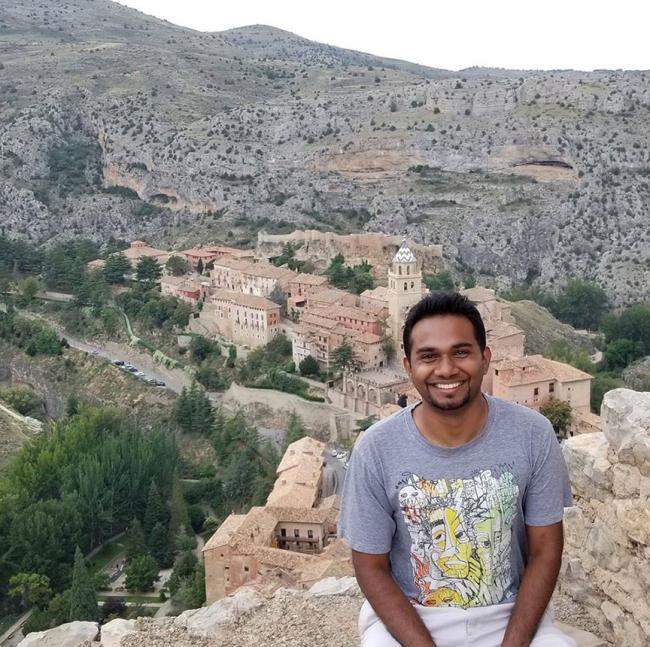 Graduate student Tanveer Karim abroad in Spain. The village in the background is Albarracín.

One of the most puzzling discoveries in cosmology is the accelerated expansion of the universe, which points to the existence of fundamental physics beyond what established physical laws tell us. One explanation for this expansion is dark energy — an unknown form of energy that literally causes the fabric of space to expand.

Astronomer Tanveer Karim studies the phenomenon of dark energy using the Dark Energy Spectroscopic Instrument (DESI). He combines data of galaxies from when the universe was 5 - 8 billion years old with Planck cosmic microwave background (CMB) lensing data to understand how large-scale structures were growing and evolving during this era. Tanveer aims to use that information to constrain dark energy and other explanations for cosmic acceleration.

Tanveer first became inspired by astrophysics while participating in the Astronomy Olympiad during high school. He still remembers an exercise in which they derived the curvature of the universe, finding it "incredibly beautiful and awe-inspiring that astronomers try to make sense of the whole universe by scribbling down ideas on a piece of paper." He went on to graduate from the University of Rochester with a BS in Physics and Astronomy.

Tanveer, who grew up in Bangladesh and New York City, has a love of languages that he has put to use both in studying Persian during his grad school tenure and leading a Bangla translation volunteer team. He volunteers with Respond Crisis Translation, a non-profit that provides translation services to immigrants, refugees, other non-profits, and asylum seekers.

He also has a newfound love of the outdoors that he has cultivated while in Cambridge, hiking a few of New Hampshire's 4,000-footers and biking Martha's Vineyard and the local Minuteman Trail.

After graduation, Tanveer hopes to get a postdoctoral position before eventually joining the faculty at a research institution. He will continue his work with DESI, with plans to become involved with other major cosmology collaborations, exploring how combining data from different surveys can help answer the problem of cosmic acceleration.

Can Cosmic Inflation be Ruled Out?