A colossal astronomical tapestry displays the majesty of the Milky Way in unprecedented detail. 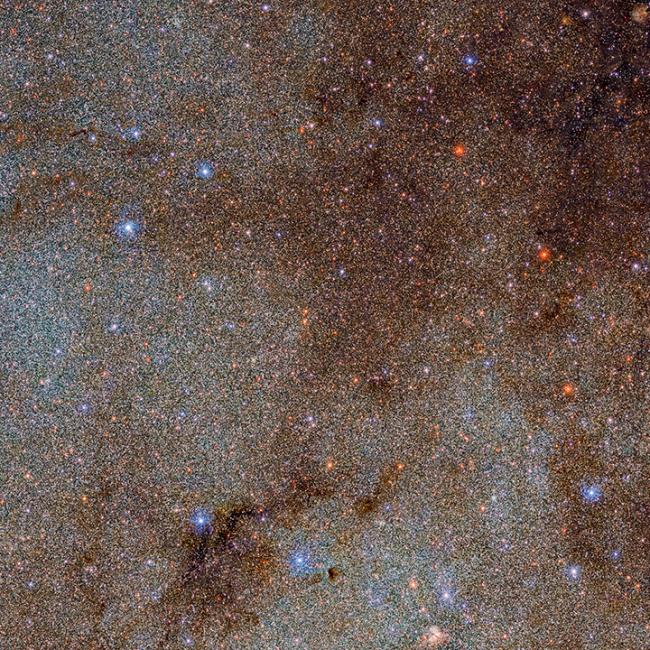 Cambridge, MA – A new astronomical survey is a portrait of gargantuan proportions. It shows the staggering number of stars bristling among the wispy bands of dust in our home galaxy, the Milky Way. The heart of our galaxy — the central bulge of bright blue stars that also contains the supermassive black hole Sagittarius A* — is at the left side of this panorama.

This galactic panorama was captured by the Dark Energy Camera (DECam) instrument on the Víctor M. Blanco 4-meter Telescope at Cerro Tololo Inter-American Observatory (CTIO), a Program of NSF's NOIRLab. CTIO is a constellation of international astronomical telescopes perched atop Cerro Tololo in Chile at an altitude of 2,200 meters (7,200 feet). CTIO's lofty vantage point gives astronomers an unrivaled view of the southern celestial hemisphere, which allowed DECam to capture the southern Galactic plane in such detail.

Astronomers have released a gargantuan survey of the galactic plane of the Milky Way. The new dataset contains a staggering 3.32 billion celestial objects — arguably the largest such catalog so far. The survey is here reproduced in 4000-pixels resolution to be accessible on smaller devices.

The data used to create this survey originate from the second release of the Dark Energy Camera Plane Survey (DECaPS2), a survey of the plane of the Milky Way as seen from the southern sky taken at optical and near-infrared wavelengths. The new data is described today in The Astrophysical Journal Supplement.

"One of the main reasons for the success of DECaPS2 is that we simply pointed at a region with an extraordinarily high density of stars and were careful about identifying sources that appear nearly on top of each other," says Andrew Saydjari, a graduate student at Harvard University, researcher at the Center for Astrophysics | Harvard & Smithsonian, and lead author of the paper. "Doing so allowed us to produce the largest catalog ever from a single camera, in terms of the number of objects observed."

The first trove of data from DECaPS was released in 2017. With the addition of the new data, the survey now covers 6.5 percent of the night sky and spans a staggering 130-degrees in length. While it might sound modest, this equates to 13,000 times the angular area of the full Moon.

"When combined with images from Pan-STARRS 1, DECaPS2 completes a 360-degree panoramic view of the Milky Way's disk and additionally reaches much fainter stars," says Edward Schlafly, a researcher at the AURA-managed Space Telescope Science Institute and a co-author of the paper describing DECaPS2 published in The Astrophysical Journal Supplement. "With this new survey, we can map the three-dimensional structure of the Milky Way's stars and dust in unprecedented detail."

Gathering the data required to cover this much of the night sky was a Herculean task; the DECaPS2 survey identified 3.32 billion objects from over 21,400 individual exposures. Its two-year run, which involved about 260 hours of observations, produced more than 10 terabytes of data.

Most of the stars and dust in the Milky Way are located in its spiral disk — the bright band stretching across this image. While this profusion of stars and dust makes for beautiful images, it also makes the galactic plane challenging to observe. The dark tendrils of dust seen threading through this image absorb starlight and blot out fainter stars entirely, and the light from diffuse nebulae interferes with any attempts to measure the brightness of individual objects. Another challenge arises from the sheer number of stars, which can overlap in the image and make it difficult to disentangle individual stars from their neighbors.

Despite the challenges, astronomers delved into the galactic plane to gain a better understanding of our Milky Way. By observing at near-infrared wavelengths, they were able to peer past much of the light-absorbing dust. The researchers also used an innovative data-processing approach, which allowed them to better predict the background behind each star. This helped to mitigate the effects of nebulae and crowded star fields on such large astronomical images, ensuring that the final catalog of processed data is more accurate.

"Since my work on the Sloan Digital Sky Survey two decades ago, I have been looking for a way to make better measurements on top of complex backgrounds," said Douglas Finkbeiner, a professor at the Center for Astrophysics, co-author of the paper, and principal investigator behind the project. "This work has achieved that and more!"

"This is quite a technical feat. Imagine a group photo of over three billion people and every single individual is recognizable!" says Debra Fischer, division director of Astronomical Sciences at NSF. "Astronomers will be poring over this detailed portrait of more than three billion stars in the Milky Way for decades to come. This is a fantastic example of what partnerships across federal agencies can achieve."

Interactive access to the imaging with panning/zooming inside of a web-browser is available from the LegacySurveyViewer, the World Wide Telescope and Aladin.

The DECaPS2 dataset is available to the entire scientific community and is hosted by NOIRLab's Astro Data Lab, which is part of the Community Science and Data Center.

DECam was originally built to carry out the Dark Energy Survey, which was conducted by the Department of Energy and the U.S. National Science Foundation between 2013 and 2019.

NSF's NOIRLab (National Optical-Infrared Astronomy Research Laboratory), the U.S. center for ground-based optical-infrared astronomy, operates the international Gemini Observatory (a facility of NSF, NRC–Canada, ANID–Chile, MCTIC–Brazil, MINCyT–Argentina, and KASI–Republic of Korea), Kitt Peak National Observatory (KPNO), Cerro Tololo Inter-American Observatory (CTIO), the Community Science and Data Center (CSDC), and Vera C. Rubin Observatory (in cooperation with DOE's SLAC National Accelerator Laboratory). It is managed by the Association of Universities for Research in Astronomy (AURA) under a cooperative agreement with NSF and is headquartered in Tucson, Arizona. The astronomical community is honored to have the opportunity to conduct astronomical research on Iolkam Du’ag (Kitt Peak) in Arizona, on Maunakea in Hawai‘i, and on Cerro Tololo and Cerro Pachón in Chile. We recognize and acknowledge the very significant cultural role and reverence that these sites have to the Tohono O'odham Nation, to the Native Hawaiian community, and to the local communities in Chile, respectively.