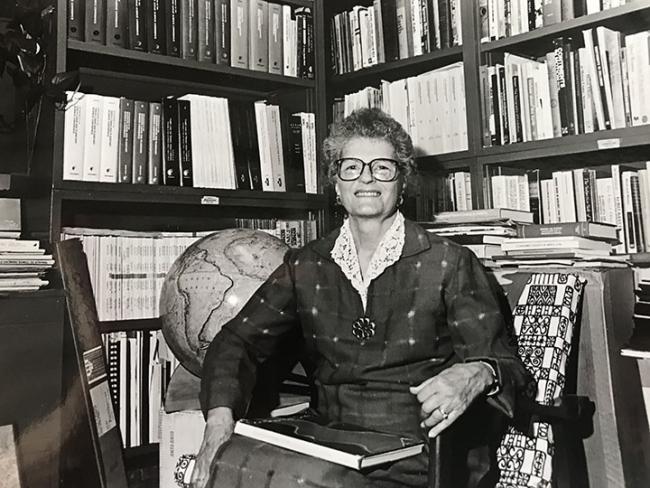 On February 12, 2018, the pioneering geologist Ursula Marvin passed away. Ursula was born and raised in Vermont, and went to college at Tufts, graduating in 1943. She developed at Tufts an enduring interest in geology, which survived strong gender-based discouragement from a faculty member. She entered the Radcliffe graduate program, receiving an M.S. in geology in 1946. After a period in the private sector, she returned to Harvard and received her Ph. D. in geology in 1969. Ursula joined the Smithsonian Astrophysical Observatory (SAO) in 1961, and spent the rest of her career there.

Ursula's work was widely recognized, including the History of Geology Award from the Geological Society of America (1986), the WISE Award for lifetime achievement in science (1997), the Geological Society of London's Sue Tyler Friedman Medal (2005), and the Service Award of the Meteoritical Society (2012). The Boston Globe ran an obituary about Ursula on February 19, which can be found here: https://www.bostonglobe.com/metro/obituaries/2018/02/18/ursula-bailey-ma....

More details on Ursula and her career are available in the following adapted excerpt from the CfA Almanac, July 1997:

When the Harvard Geology Club wanted to resume its all-male tradition after World War II, Ursula Bailey and her friends had a better idea. Already an accomplished researcher in the Geology Department, she thought The Club should be open to women. After some haggling, a compromise was reached. The first meeting of the year for The Geology Club would be "Ladies Night." When new business was called for, the Treasurer encouraged anyone who had not yet paid his or her dues to do so. Ursula was the first in line with her $2.00 - and the club has accepted women ever since.

Although over-used, the word "pioneer" fits quite well when describing Dr. Ursula Marvin (nee Bailey). As a child in rural Vermont, Ursula found the land around her, especially the mountains and their rocks, a natural interest. And, although she took few science courses in high school, she often helped her father in his job as an entomologist for the state of Vermont. However, she never really considered science as a career until her second year of required science at Tufts College - the first being an unfruitful one in biology and discovered a love for geology.

"I was amazed at how hours in a biology lab seemed endless, but, once in the geology lab, time went by so quickly," she said. "Unfortunately, when I asked my geology professor if I could switch majors to geology he told me I should be learning to cook. Geology was no field for women."

Even though she could not change her major, Ursula continued taking as many geology courses as possible, graduating in 1943 with a degree in history. Another Tufts professor encouraged her to apply to Radcliffe for graduate study in geology. While she lacked many of the background courses, Ursula had excellent grades in geology and was accepted into the program. She received her Master's degree in geology from Harvard-Radcliffe in 1946.

After spending some time as a Research Assistant at the University of Chicago, she returned to Harvard to begin work toward a doctorate. There she met fellow graduate student, Tom Marvin, who later became her husband. Before either could finish their degrees, however, they were lured away by the Union Carbide Ore Company and sent to Brazil to look for manganese oxide deposits, a necessary ingredient for Union Carbide's Eveready batteries. After a year, the company sent them to the highlands of Angola to look for more manganese oxide, as well as copper and other minerals. Later, they went back to Brazil, remaining there until 1958.

When the Marvins returned to Cambridge from South America, her former advisor at Harvard asked her to join him studying meteorites. Soon, she also was collaborating with Dr. Edward L. Fireman at the Smithsonian Astrophysical Observatory, then a growing force on Observatory Hill. In 1961, Marvin was offered a civil service position at SAO - a position she held for decades.

At SAO, Marvin would be part of a small group of scientists chosen by NASA to study the lunar rocks brought back by the Apollo missions. One of her most exciting discoveries, reported in a cover story in Science, was of an Apollo 15 rock containing the minerals cordierite, spinel, and forsterite, an assemblage indicative of an origin somewhere near the base of the lunar crust - one of the most deep-seated samples from the Moon.

While continuing to study lunar samples, Marvin became involved in the study of extraterrestrial materials a little closer to home. In 1969, after a Japanese team discovered several meteorites in Antarctica, the scientific community realized that, in this frozen land, meteorites sometimes were concentrated on patches of bare ice by a combination of ice and wind motions. Marvin spent the 1978-79 and 1981-82 field seasons in Antarctica, collecting meteorites, including some varieties new to science.

She chaired the NSF-NASA-SI committee that allocates research samples of Antarctic meteorites to laboratories around the world. And, in recognition of her important scientific contributions to Antarctic science, a 'nunatak,' or small mountain poking up through the ice sheet, in the Beacon Valley Quadrangle of Antarctica was named in her honor in 1992. [In addition to Nunatak Marvin, there is also an Asteroid Marvin, renamed in her honor June 27, 1991, for "contributions to research on meteorites, lunar samples, Ganymede, and the history of meteoritics."]

Over the course of her career, Marvin wrote or co-authored more than 160 research papers. In addition to her research on meteorites and lunar rocks, she participated in the geological mapping of Ganymede, Jupiter's largest satellite and returned to Antarctica in 1985 to search for evidence at the Cretaceous-Tertiary boundary of the impact that may have led to the extinction of the dinosaurs 65 million years ago. She also became increasingly interested in the history of science, as shown by a book she wrote on continental drift and a number of recent articles on the history of ideas about meteorites and impact processes.

Marvin also did much to advance the cause of women in science. In 1974, she was appointed as the first Coordinator for the Federal Women's Program at SAO, which eventually became today's Women's Program Committee. Also in the 1970's, she served on the American Geological Institute's Committee of Women in the Geosciences for which she compiled and edited the annual Roster of Women in the Geosciences Professions. For the Journal of Geological Education, she wrote about the issue of men and women in the geosciences. During the 1980's, she encouraged young women to pursue scientific careers through Harvard's Undergraduate Tutorial Committee in the Department of Earth and Planetary Sciences. And, she has served on a host of other committees and councils devoted to the advancement of science - not only for women, but for all.

In 1997, Marvin noted that much has improved for women in science since she began her long and fruitful career. Although most people in Harvard's Geology Department were very helpful, she remembers that women's access to Widener Library was restricted. Also, she was often told to leave the geology building by a watchman who insisted women were not allowed to be there alone at night.

Still, Marvin said she was mainly unaffected by the discrimination - with the obvious exception of the Harvard Geology Club. Even the professor who would not let her switch majors at Tufts eventually came around. "Years later, he invited me to teach at Tufts, and often told others how proud he was of me," said Marvin.

Scientific Discovery Gets Kind of Government Seal of Approval