To Navigate the Heavens, Take a Seat

A large spherical apparatus that sits on a Harvard rooftop appears to be an abstract piece of art, but doubles as an astronomical instrument for navigation. 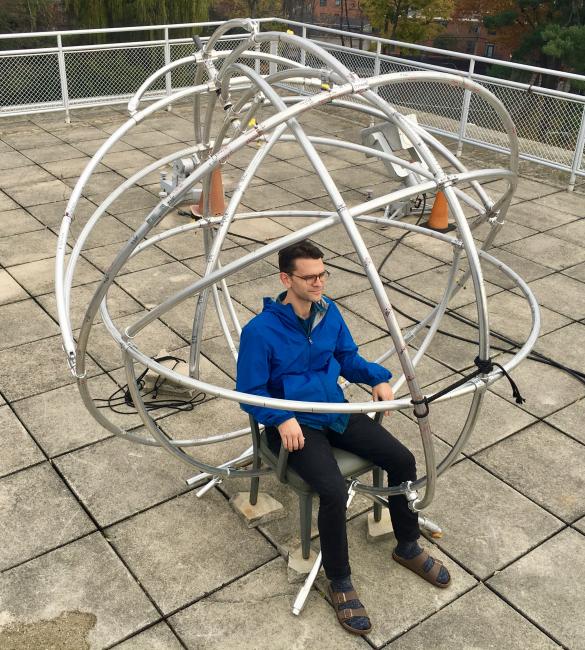 Students and visitors have undoubtedly wondered about the peculiar, spherical sculpture on the rooftop of the Center for Astrophysics | Harvard & Smithsonian. With its giant metallic rails looping around a chair, the sculpture evokes the time machine of H. G. Wells, as well as the interstellar-traveling pod in the movie Contact.

In reality, the sculpture borrows from both science-fiction stories, enabling its occupant to novelly experience time and space.

Dubbed the Maxotron after its builder Max Mulhern, a teaching assistant at the Center for Astrophysics, the sculpture is formally known as an armillary sphere. Ancient Greek and Chinese civilizations independently invented these frameworks of concentric rings more than two millennia ago.

The rings represent lines that can be projected onto the sky, including the horizon and the Earth's equator, along with the paths of astronomical bodies such as the Sun. The result is a celestial reference system for teaching astronomers, navigators and others how to orient themselves both temporally and spatially.

"For students, it really makes the sky 'click' once they sit it in," says Mulhern. "By moving these rings around, students can track how things move through the sky in relation to them, and that gives students a powerful sense of the passage of time and nudges them to join the cosmic dance."

Historically, armillaries have usually been smallish objects, externally manipulated in the same way a globe of the Earth is when mounted on a stand or held in one's hand. The sizable Maxotron, however, stands about nine feet tall and approximately seven feet across, allowing users to sit amidst its rings.

"To our knowledge, the Maxotron is the only 'sit inside' armillary sphere of its kind in the world," says Mulhern. "It's also about the largest armillary you're ever likely to see."

Thanks to this unique design, Maxotron occupants can experience the perspective of seafarers and explorers who, going back centuries, have relied on the heavens to infer their location on the surface of the Earth, the time of day or night and their heading or direction.

"When you use the Maxotron, it's like dialing back into human history before the invention of the portable timekeeping devices or telescopes," says Mulhern, "when the only way to know the time or where you were was to keep track of the sky."

The idea for the Maxotron came from Philip Sadler, the director of the Center for Astrophysics' Science Education Department and the Harvard F.W. Wright senior lecturer in astronomy. Sadler has long taught 'Astronomy 2: Celestial Navigation,' a class that has been offered at Harvard for 108 years, focusing on practical navigational techniques involving tools such as sextants, compasses and charts.

Mulhern brought in his personal and professional expertise as a celestial navigator when he became a teaching assistant for Sadler's course back in 2017. A certified skipper and sailor all his life, Mulhern feels that any seafarer worth their salt — "no pun intended," he says — should learn the timeworn art of navigating by the sky alone. While working as a sculptor in Paris and London, Mulhern thus began teaching celestial navigation for the United Kingdom's Royal Yachting Association. Through professional contacts, he linked up with Sadler and came stateside.

After noticing an appealing empty space in the middle of the Center for Astrophysics' roof, Mulhern approached Sadler about building an astronomy-themed work of art. Sadler suggested a sit-in style armillary, called the Hagner Planetarium, that had once stood at the former Hondo Air Base in Texas, where thousands of navigators trained during World War II. 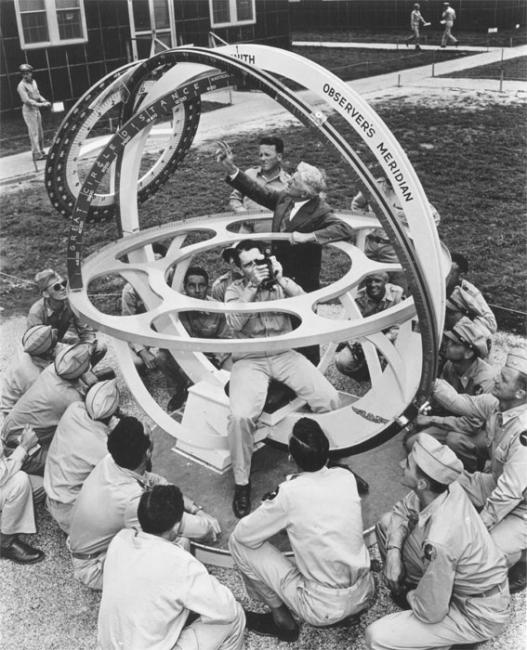 A photograph of an armillary sphere known as the Hagner Planetarium, which was used to train navigators during World War II at Hondo Air Base in Texas.

Duly inspired, Mulhern set to work on an enhanced version of this armillary in 2018, configured for the 42° North latitude of Harvard. Initially with materials including Styrofoam boards and bamboo and then hand-bent aluminum pipes, Mulhern honed a half-scale model in his home kitchen before handing off the final specs to a metalworking company.

Of the Maxotron's numerous rails and connecting struts, the most familiar is the fixed horizon, the circular boundary where the sky appears to touch the ground. A spinnable angled circle rising above and dipping below the horizon represents the ecliptic — the plane of Earth's orbit around the Sun which, seen from Earth's surface, is the path the Sun travels across the sky. A third full circle, called the observer’s meridian, runs directly overhead and under the chair a user sits in.

The celestial equator, an extension into space of Earth's equator, is represented by a 180° arc, while another 180° rail shows the local hour angle, the angle measured westward between an observer's meridian and a celestial object's meridian at the time of observation.

Onto these overlapping circles, users can place foam balls indicating locations of the Sun, Moon and other astronomical objects of interest. 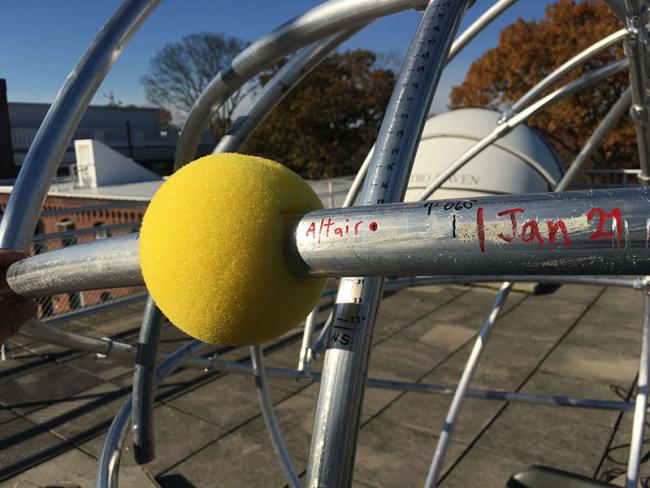 A close-up of one of the foam balls users can place on the Maxotron's rails to represent the Sun or another celestial object.

"With practice, the circular rails become embedded in the minds of the students. When they gaze up, they automatically see these circles and can run celestial bodies along them in their proper positions to see where bodies have been and where they are going," Mulhern explains.

Once the Maxotron model is etched in the student's mind, it becomes portable. The student can accurately create mental images of the sky and solve navigational problems.

"We like to accordingly say that the Maxotron 'augments the reality' of the sky without the use of electronics or lenses," Mulhern says.

Mulhern and Sadler are excited to offer more people the opportunity to experience the Maxotron. The apparatus was recently reassembled on the eighth-floor terrace of the Harvard Science Center, just about a mile down the road from the Center for Astrophysics, where the instructors have started offering the celestial navigation class with expanded enrollment.

Mulhern hopes the Maxotron continues to inspire and educate as a "functional sculpture."

"Our understanding of ourselves and our existence on Earth entails understanding the cosmos," Mulhern says. "I think any model or device that expands our experience and knowledge of the sky is therefore essential to achieving self-exploration and self-fulfillment."

Science Education Department
Young people are generally interested in science across demographics, but for many — particularly girls and students of color — that interest doesn’t lead to subsequent engagement in STEM (science, technology, engineering, and mathematics) fields. The Youth Astronomy Network (YouthAstroNet) is a program of the Science Education Department of the Center for Astrophysics | Harvard & Smithsonian designed to help middle school-aged students identify as people capable of doing real science. Young people participating in YouthAstroNet use the CfA’s MicroObservatory telescopes to obtain real astronomical data, and connect with scientists and educators through a dedicated online community.
4