Staff members virtually welcomed individuals with disabilities, allowing attendees to ask questions and learn more about work at the CfA. 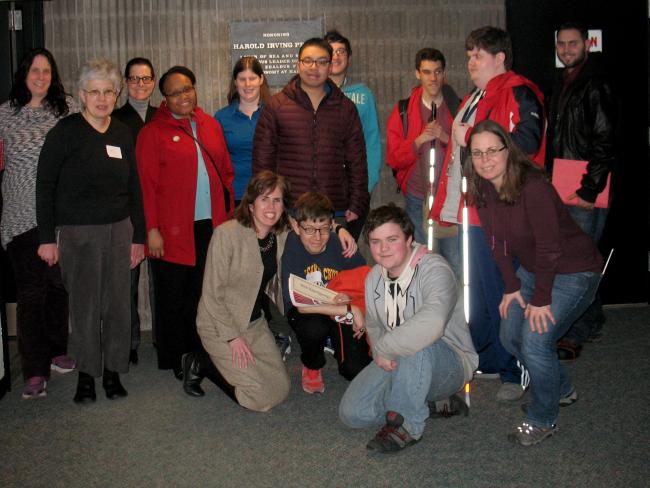 Thanks to a recent job shadow event, scientists, engineers, and staff at the Center for Astrophysics | Harvard & Smithsonian (CfA) shared information about their research and work life with a small group of individuals with disabilities.

The annual event is organized by program coordinator Christine Crowley and astronomer Allyson Bieryla who aim to make the CfA and its resources accessible to all populations.

Now in its sixth year, Crowley and Bieryla partner locally with staff from the Perkins School for the Blind, the Ross Center at the University of Massachusetts Boston (UMass Boston) and Work Without Limits to bring individuals with disabilities to the CfA. This free event is open to high school and college students and recent graduates both in New England and across the country.

The day-long program included panels focused on accessibility and inclusion in the workforce organized by Harvard Talent Acquisition Services and Work Without Limits.

"The highlight of the program is pairing students with CfA staff mentors who host open-ended informational interviews for attendees to learn about their careers," says Crowley. CfA volunteer mentors who participated in the fall included scientists, staff and graduate students.

During her session with mentees, Kimberly Arcand, who works at the Chandra X-ray Observatory as a data scientist, shared how scientists are working to make data more accessible. The Chandra visualization team work to enable the visually impaired to experience the cosmos, too. Examples include writing descriptions of Chandra's image renderings and sonifying data — auditory translations of images.

Normally, digital data collected by Chandra, which is operated on behalf of NASA by SAO, is translated visually into images; the sonification project follows an analogous approach. In the same way different wavelengths of light are assigned different colors in Chandra’s image renderings, different musical notes are assigned to data to represent the position and brightness of sources. When combined, they form a "symphony of sound," Arcand says.

"I expected beeps and boops, but it was so musical," said Perkins student Jake Longmire when he "heard the universe." Longmire is visually impaired.

Arcand adds that working on accessibility positively challenges scientists to understand and represent their data differently — and to better communicate it with everyone.

"It is exciting to consider the future and how we will be able to de-puzzle the universe in a more collaborative way," she says.

Arcand's interactions with the students went beyond one day — the job shadow event is designed to build lasting relationships — and her mentees were invited to help test Chandra accessibility data in the future.

Perkins student Kyle Butt, who plans to pursue forensic meteorology and is visually impaired, says the experience "will stay with [him] forever."

He and his classmates hoped that the event would inspire staff and scientists to consider additional accessibility updates, such as expanding access to Braille, using accessible fonts and adding adaptive technology to labs. For example, items such as speaking measuring tapes or scales can help make labs a more equitable space for all users.

Perkins teacher Kate Fraser, who has recruited student and staff participants since the inception of the job shadow event, added that she is excited about the increasing focus on accessibility in recent years. "The world is opening up, and opening a whole new world of adaptations with it," Fraser says.

"While the fall event was hosted virtually because of COVID, the restrictions surprisingly increased the accessibility of the event itself," says Crowley. "More students were able to join!"

Crowley and Bieryla plan to include hybrid elements in future events to keep the program accessible and open to everyone with interest across the country, while offering students the ability to experience CfA facilities in person, too.

"This event helps draw attention to the necessity of increasing accessibility in STEM, and ensures that students who are interested in astronomy are empowered to pursue it," Bieryla says.

To Navigate the Heavens, Take a Seat

Science Education Department
Young people are generally interested in science across demographics, but for many — particularly girls and students of color — that interest doesn’t lead to subsequent engagement in STEM (science, technology, engineering, and mathematics) fields. The Youth Astronomy Network (YouthAstroNet) is a program of the Science Education Department of the Center for Astrophysics | Harvard & Smithsonian designed to help middle school-aged students identify as people capable of doing real science. Young people participating in YouthAstroNet use the CfA’s MicroObservatory telescopes to obtain real astronomical data, and connect with scientists and educators through a dedicated online community.
4