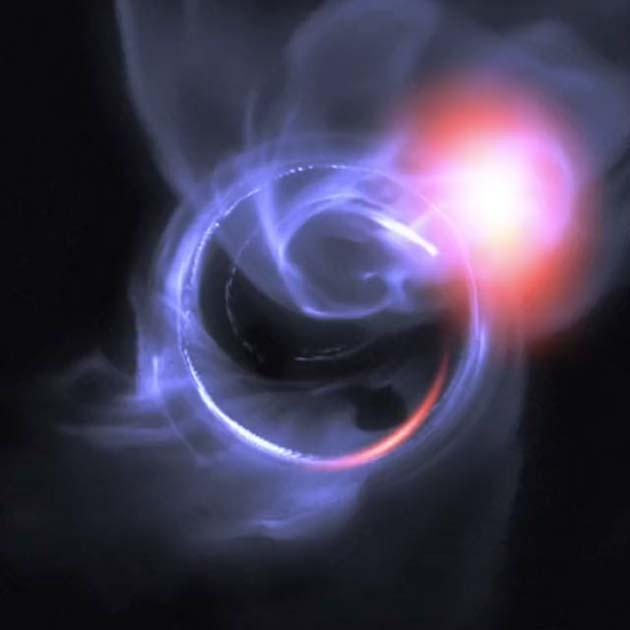 A visualization of simulated flaring activity and clouds of material around the supermassive black hole in the galactic center. Astronomers observing these events at X-ray and infrared wavelengths simultaneously report evidence that the X-ray emission often precedes the infrared by ten to twenty minutes, consistent with one class of theoretical models.

The supermassive black hole (SMBH) at the center of our Milky Way galaxy, Sagittarius A*, is by far the closest such object to us, only about 25 thousand light-years away. Although not nearly as active or luminous as other SMBHs, its relative proximity provides astronomers with a unique opportunity to probe what happens close to the "edge" of a black hole. Monitored in the radio since its discovery and more recently in the infrared and the X-ray, Sgr A* appears to be accreting material at a very low rate, only a few hundredths of an Earth-mass per year. Its X-ray emission is persistent, probably resulting from the rapid motions of electrons in the hot accretion flow associated with the black hole. Once a day there are also flares of emission that are highly variable; they appear more often in the infrared than in X-rays. Some submillimeter wavelength flares have also been tentatively linked to IR flares, although their timing seems to be delayed with respect to infrared events. Despite these intensive observational efforts, the physical mechanisms producing flaring around this SMBH are still unknown and are the topic of intense theoretical modeling.

CfA astronomers Steve Willner, Joe Hora, Giovanni Fazio, and Howard Smith joined their colleagues in undertaking a systematic campaign of simultaneous multiwavelength observations of flaring in SagA* using the Spitzer and Chandra observatories (the Submillimeter Array was also used in some of the series). In over one hundred hours of data taken over four years (the longest such dataset ever obtained), the team observed four flare events in both X-ray and infrared in which the X-ray event appears to lead the infrared by ten to twenty minutes. The correlation between the observed peaks implies there is some physical connection between them, and the slight timing difference is in agreement with models that describe the flares as coming from magnetically driven particle acceleration and shocks. Exactly simultaneous events can’t be completely ruled out, however, but the results are nevertheless inconsistent with some of the more exotic models that involve the relativistic motion of electrons. If future simultaneous observations planned for the summer of 2019 also see flaring, they can provide new constraints on the time lag and on associated physical models.