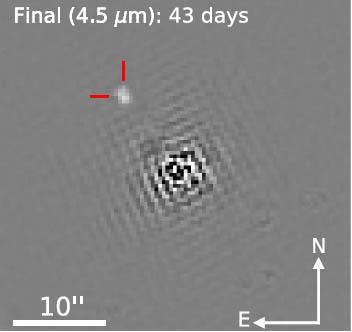 The IRAC infrared image of the emission at 4.5 microns from the merger of two neutron stars first detected by gravitational wave detectors. The image was taken 43 days after the merger event. After sophisticated processing to remove most of a very bright nearby object, the merger source can be clearly seen in the upper left, highlighted with red.

GW170817 is the name given to a gravitational wave signal seen by the LIGO and Virgo detectors on 17 August 2017. Lasting for about 100 seconds, the signal was produced by the merger of two neutron stars. The observation was then confirmed - the first time this has happened for gravitational waves - by observations with light waves: the preceding five detections of merging black holes did not have (and were not expected to have) any detectable electromagnetic signals. The light from the neutron star merger is produced by the radioactive decay of atomic nuclei created in the event. (Neutron star mergers do more than just produce optical light, by the way: they are also responsible for making most of the gold in the universe.) Numerous ground-based optical observations of the merger concluded that the decaying atomic nuclei fall into at least two groups, a rapidly evolving and fast moving one composed of elements less massive than Lanthanide Series elements, and one that is more slowly evolving and dominated by heavier elements.

Ten days after the merger, the continuum emission peaked at infrared wavelengths with a temperature of approximately 1300 kelvin, and continued to cool and dim. The Infrared Array Camera (IRAC) on the Spitzer Space Telescope observed the region around GW170817 for 3.9 hours in three epochs 43, 74 and 264 days after the event (SAO is the home of IRAC PI Fazio and his team). The shape and evolution of the emission reflect the physical processes at work, for example, the fraction of heavy elements in the ejecta or the possible role of carbon dust. Tracking the flux over time enables the astronomers to refine their models and understanding of what happens when neutron stars merge.

A team of CfA astronomers, Victoria Villar, Philip Cowperthwaite, Edo Berger, Peter Blanchard, Sebastian Gomez, Kate Alexander, Tarraneh Eftekhari, Giovanni Fazio, James Guillochon, Joe Hora, Matthew Nicholl, and Peter Williams and two colleagues participated in an effort to measure and interpret the infrared observations. The source was extremely faint and moreover lies close to a very bright point source. Using a novel algorithm to prepare and subtract the IRAC images to eliminate the constant-brightness objects, the team was able to spot the merger source clearly in the first two epochs, although it was fainter than was predicted by the models by more than about a factor of two. It had dimmed beyond detection by the third epoch. However the rate of dimming and the infrared colors are consistent with models; at these epochs the material had cooled down to about 1200 kelvin. The team suggests several possible reasons for the surprising faintness, including possible transformation of the ejecta into a nebulous phase and notes that the new dataset will help refine the models.

The scientists conclude by emphasizing that future binary star merger detections (an improved LISA will begin observing again in 2019) will similarly benefit from infrared observations, and that characterization of the infrared will enable more accurate determination of the nuclear decay processes underway. Their current paper, moreover, shows that Spitzer should be able to spot binary mergers as far away as four hundred million light-years, about the distance that the improved LISA should be able to probe.

Modeling the Radiation of Black Holes