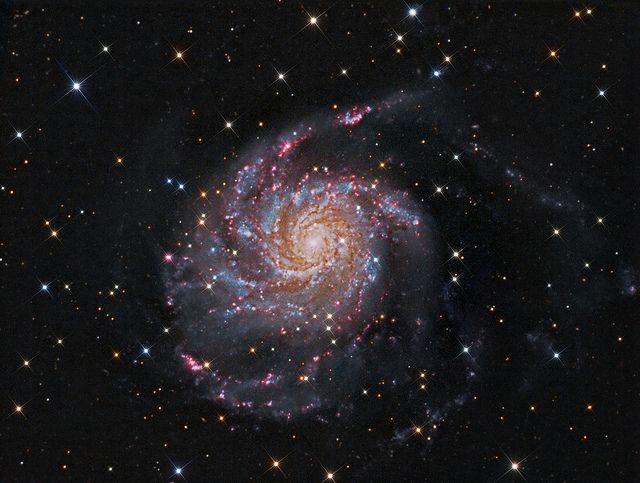 The galaxy M101 as seen in the optical and in the light of atomic hydrogen gas (red). The hydrogen lines reveal that the gas is rapidly moving and turbulent, and a new study of turbulence in galaxies concludes that in many cases it is generated not by star formation but by gravitational effects alone.

The gas in galaxies is typically seen to be moving at very rapid, even supersonic velocities, providing clear evidence that the medium is highly turbulent. Looking more closely at gas clouds in our own Milky Way, astronomers have similarly demonstrated using a variety of different observations that the interstellar medium is turbulent. Turbulence is a key physical parameter in the star formation process because, like the thermal pressure of warm gas, it counters the collapse of clouds into stars from gravitational contraction. Despite its importance and ubiquity, however, turbulence is poorly understood. Even its origin is far from clear. Some scientists argue that turbulence results from star formation itself, as new stars and their associated supernovae drive winds that stir up the interstellar medium. Other astronomers counter that the influence of gravity alone is enough to induce supersonic motions in gas as it moves through and across a rotating galaxy.

CfA astronomer Blakesley Burkhart and her colleague examine in theoretical detail the physical processes involved in generating turbulence, and compare their conclusions with observations of galaxies. It has long been noted that the star formation rate in galaxies appears to correlate approximately with the spread of gas velocities seen in that galaxy. Indeed, that result was one of the reasons that a causal link between star formation and turbulence was proposed. The scientists point out, however, that if star formation were responsible for that spread then the correlation would be much tighter than is observed. Actually, the gravity-driven model of turbulence shows much better agreement with the data. For example, the latter has no trouble reproducing galaxies with very high velocities yet having very low star formation rates; in these situations there is just not much gas to make new stars, but gravity nevertheless drives the fast motions. The scientists' results are highly suggestive though not definitive, and very likely there are cases where both star formation and gravity play comparable roles. The authors conclude by discussing the limitations of the current observational dataset, and they suggest future measures to refine their conclusions, but in the meantime they have demonstrated that turbulence has a more complicated origin than was typically thought.

"Is Turbulence in the Interstellar Medium Driven by Feedback or Gravity? An Observational Test," Mark R. Krumholz and Blakesley Burkhart, MNRAS 458, 1671, 2016.