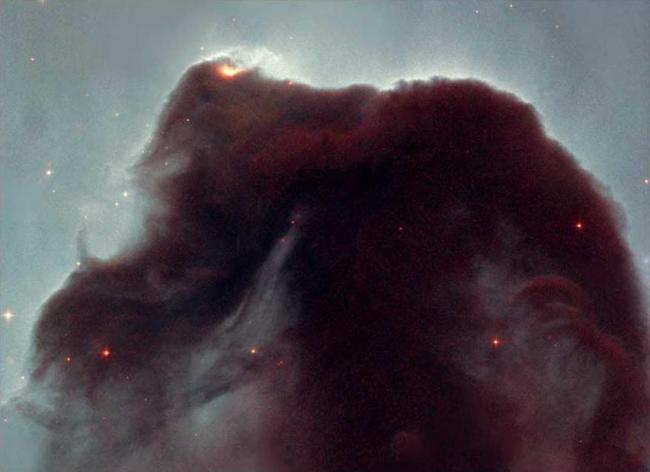 An optical image of the Horsehead Nebula in Orion, whose dust obscures the glowing gas behind it. Interstellar dust grains have long been thought to be produced in supernovae ejecta but grains can also be destroyed by supernovae. Astronomers have completed detailed new calculations of dust production and destruction using data on the Cassiopeia A supernova remnant. They conclude that under the right conditions supernovae can indeed be significant sources of interstellar dust.

Dust grains in the interstellar medium are responsible for the dramatic shapes darkening the faces of bright nebulae, the Horsehead Nebula for example. The grains absorb ultraviolet and optical light, and when gathered in molecular clouds or other high density regions they block the background light from our view. About one percent of the mass of the interstellar medium is in the form of dust with the rest being gas, mostly hydrogen. Dust also plays important roles in the lifecycle of stars and galaxies. Dust and molecules cool the gas, facilitating the star-formation process. The grains assist in the formation of molecules as atoms in the gas become attached to their cold surfaces and then interact with one another; in the presence of ionizing radiation, the grains also shield the molecules from destruction. Not least, the dust radiates away thermal energy at infrared wavelengths, and luminous galaxies are often dominated by the infrared emitted by their radiation-heated dust.

Dust grains are made of elements produced in stars, especially silicon and carbon; moreover, their surfaces can be coated with layers of water ice or other kinds of frozen molecules. Dust is therefore a repository of elements in a galaxy and helps regulate their abundances and transport. In the first few billion years of the universe, and especially in the epoch when star formation was most active, all of these effects make the role of dust particularly important. Where does the dust come from? The cores of dust grains are known to form in the dense ejecta of supernovae and in the slow, dense winds from evolved giant stars. But grains can also be destroyed by radiation or hot gas, in particular by shocks and by grain–grain collisions, both also typically produced by supernovae. As a result, there has been a persistent uncertainty in the theory about an apparent imbalance between grain destruction and creation rates. One suggested solution proposed that accretion of gas onto pre-existing grain cores helps maintain the dust abundance, but the idea nonetheless requires that grain cores be injected at high enough rates.

CfA astronomer Jonathan Slavin led a group of astronomers investigating how much dust produced by supernovae can escape into the interstellar medium. They completed new hydrodynamic calculations of the evolution of dust grains based on observations of the Cassiopeia A supernova, located about eleven thousand light-years away. They trace the grain evolution from the formation in dense ejecta through their experience of shocks and other destructive processes. They find that larger grains can survive (those with radii slightly smaller than a wavelength of light for silicate-composed grains, and half that for carbon-based grains) while even smaller ones are destroyed. Once these larger grains are ejected into the interstellar medium, their high velocities make them vulnerable to collisional destruction, but the scientists find that about 10%-20% of silicate grains survive (30-50% for carbon-based grains). They conclude that supernovae can indeed be significant contributors to the dust, with the supernova of a nineteen solar-mass star producing about one-tenth of a solar-mass of dust.