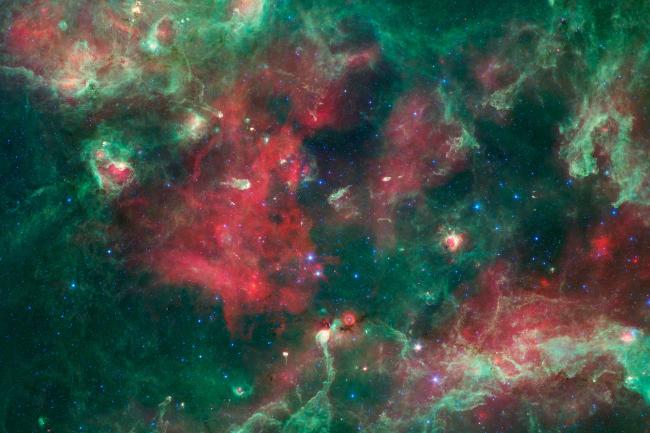 A bubbling cauldron of star birth is highlighted in this image from NASA's Spitzer Space Telescope of Cygnus X. Cygnus X is about 4,500 light-years away in the constellation Cygnus, or the Swan.

Infant Stars in a Stellar Nursery

Cygnus-X was first identified as a bright source of radio emissions in the 1950s, when radio astronomy was still in its infancy. Located near the center of the constellation Cygnus the Swan — also known as the Northern Cross — astronomers realized the bright emissions came from ionized gas, where newborn stars stripped electrons from atoms. Cygnus-X is now recognized as the largest molecular cloud within 6,500 light-years of Earth, and home to a very high number of giant blue stars.

The Spitzer Legacy Survey of Cygnus-X surveyed this part of the sky in six different infrared wavelengths using the Spitzer Telescope’s  Infrared Array Camera (IRAC) and Multiband Imaging Photometer for Spitzer (MIPS). The survey covered a patch of the sky roughly 5 degrees square, which is about the size of 100 full Moons. IRAC was developed in part at CfA, and its operations center is hosted at the facility.

The Cygnus-X region contains about three million Suns worth of gas and dust, stretching for about 660 light-years. It is home to a large number of O and B stars, the hottest and most massive stars, which have short life spans. The Spitzer Legacy Survey looked at these stars and the protostars that would eventually become giants like these, to characterize the stages of star-formation. The survey also tracked the birth and evolution of lower-mass stars, which are much less bright but far more numerous, to see how their giant siblings affected their growth. These observations also included a wealth of data on protostellar disks, which are an important stage of star formation significant for the birth of planets.

Spitzer completed the observational portion of this survey, finding thousands of young stars and protostars, and the data continues to provide great insights into the rapid star formation of a sort seen in the galaxies known as starburst galaxies. The survey will also provide groundwork for future observations of Cygnus-X, such as might be performed by NASA’s James Webb Space Telescope.