Moons are very common in the Solar System. Earth’s Moon is very planet-like, along with some of the satellites of Jupiter and the other giant planets. Even small worlds like Pluto can have multiple moons, and astronomers have detected satellites orbiting asteroids. The similarities and differences between moons is an important part of understanding the way the Solar System formed and continues to evolve. Astronomers are even beginning to look for exomoons: moons orbiting planets in other star systems.

Center for Astrophysics | Harvard & Smithsonian scientists study moons in the Solar System and beyond in various ways: 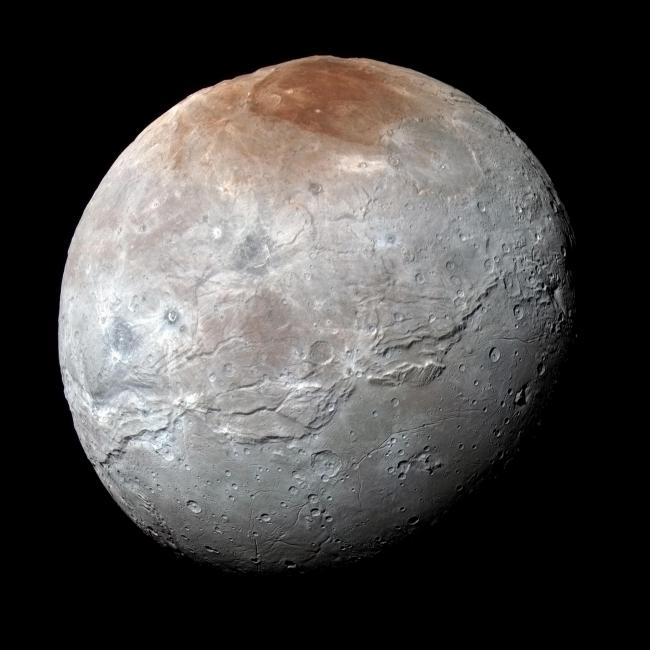 Pluto's largest moon Charon was imaged in detail for the first time in 2015 by NASA's New Horizons spacecraft. Understanding the formation and evolution of moons is essential for planetary science research.

Every Moon a World

Mercury and Venus are the only substantially-sized worlds in the Solar System without moons. Every other planet and a significant number of smaller bodies have them. These moons vary widely in their sizes and properties, from Mars’ relatively small potato-like satellites to Saturn’s moon Titan, which has a thick nitrogen atmosphere and the only liquid seas in the Solar System other than Earth.

The large, planet-like moons are of particular interest to researchers. A few, including Jupiter’s moon Europa and Saturn’s moon Enceladus, have an ocean of liquid water underneath their thick solid-ice surfaces, kept flowing by the gravitational tidal forces of their host planets. Many researchers even think these moons might harbor life, in a sunless environment radically different from Earth.

Many questions about moons involve their formation and long-term orbital stability. Jupiter and Saturn look like miniature solar systems, with a number of moons in regular, nearly-circular orbits mixed with a larger number in wildly looping eccentric orbits. It’s possible some of these “irregular” moons formed elsewhere in the Solar System as asteroids or other objects, before being snagged by their planet’s gravity.

Other moons, including Earth’s Moon, likely formed in the chaotic early days of the Solar System. In that era, protoplanets and smaller chunks of material orbited wildly, colliding with each other. From a wide variety of evidence, scientists think a large protoplanet slammed into the infant Earth, knocking a chunk of material off that became the Moon. Asteroid moons also likely formed out of their host world, though in those cases collisions might not be needed: they might have just spun fast enough to fling some material off and into orbit.

The same type of gravitational tidal force from the Moon responsible for tides in the oceans is slowly changing Earth’s rotation rate, making our days longer. Similar but relatively stronger forces have locked Pluto and its largest moon Charon together, so they always face each other. Meanwhile, other moons like Mars’ Phobos and Neptune’s Triton are in decaying orbits. Eventually their host planets’ gravitational forces will tear these moons into pieces, possibly creating rings like those around Saturn.

While every moon may reflect its unique history and environment, they all can help us understand the formation and evolution of the Solar System. The chemical composition and structure of moons are clues to their origin, and reveal details about the shared history they have with their host planets.

Now that we know about thousands of exoplanets, including a number of giant worlds, astronomers are beginning to look for exomoons. Since moons outnumber planets in the Solar System, it’s likely that’s true in other star systems. Some exomoons might even be habitable, if their host planets orbit their star at a reasonable distance. Icy exomoons like Titan or Enceladus are probably common as well, though too hard to detect for the foreseeable future. However, astronomers can extrapolate what we learn from our own Solar System to make educated guesses about how many exomoons might be out there, and what they might be like.