Pluto and its Moons 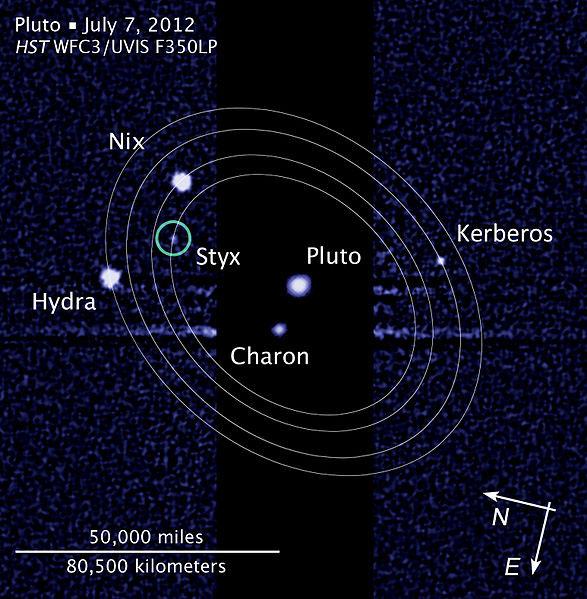 An image of the Pluto system taken by Hubble, showing five moons (Charon plus four much smaller bodies) orbiting the distant, icy dwarf planet Pluto; added lines show the orbits of the outer four moons. A new numerical simulation of the system concludes that the smaller moons probably formed from a disk around the Pluto-Charon pair.

In 1978, the dwarf planet Pluto was discovered to have a companion, called Charon. With a mass about 12% Pluto’s mass, Charon orbits its partner about seventeen Pluto-radii away (for comparison, our Moon has less than 2% of the Earth's mass and orbits about sixty Earth-radii away). But that’s not all. By 2012 astronomers had added four other satellites to the Pluto family: Styx, Nix, Kerberos, and Hydra. Their masses are still very uncertain, but the combined mass is estimated to be a few millionths of the mass of Pluto.

Astronomers wonder where these small satellites came from, how they acquired their stable configuration without first wandering off as their gravity perturbed one another, and how the answers to these questions can help clarify the formation and evolution processes of planetary systems in general. Current theories argue that the system formed from a giant impact between two icy objects with a total mass about 30% larger than Pluto’s current mass. Immediately after the event Charon was much closer to Pluto, but then it drifted away over a period of about one to ten million years. Some versions of the model predict that the other four siblings also formed during the initial impact, and also moved away, but with so many bodies in the family that is not so easy to do yet hold together in the regular pattern observed. A competing theory argues that the Pluto-Charon pair, after the impact, had a circumbinary disk of small objects that gradually coalesced into the four sibling moons.

CfA astronomer Scott Kenyon and his colleague Ben Bromley from the University of Utah performed numerical simulations (using codes they developed) to test these possibilities. They find that the most reasonable scenario is that Pluto and Charon formed from particles that coalesced together in the disk around the Sun - the same process that formed the Earth. Subsequently there was an impact that left them with their current sizes as a gravitationally bound, binary pair. The collision left debris behind that accumulated in a circumbinary disk. Eventually the four smaller satellites, along with probably even more as-yet undetected siblings, formed from the coalescence of particles in the circumbinary disk. It remains unclear whether the satellites drift outward to their current orbits after they have formed or while they are forming, but future simulations should resolve this uncertainty. Conclusions from this new work are soon to be tested: The NASA "New Horizons" probe mission will fly by the system in July 2015.