What happened in the early universe?

About 13.8 billion years ago, the Big Bang gave rise to everything, everywhere, and everywhen—the entire known Universe. What caused the Big Bang? What happened that first moment at the beginning of the Big Bang? When did the first stars form?

10-33 Seconds
Although the exact duration of the “Inflationary Period” is still unknown, scientists often use 10—33 Seconds as one of the typical examples. This length of time is so short, more of them can fit in one second than the number of seconds since the Big Bang.

Our knowledge of the events and forces that shaped the early Universe is dependent on our ability to understand the most extreme conditions.

On one hand, the Universe’s origin was incomprehensibly small, on dimensions much tinier than the smallest known subatomic particles, and it was completely transformed over an immeasurably brief period, much shorter than any observable time scale. On the other, the densities and temperatures were extraordinarily large, far exceeding anything existing in the present-day Universe.

To study the birth of the Universe, Scientists at the Center for Astrophysics | Harvard & Smithsonian travel to the most remote observing site on the planet: the South Pole. Due to the lack of water vapor in the air, this is one of the best sites to observe the CMB. The Amundsen-Scott South Pole Station includes BICEP3, the Keck Array, and the South Pole Telescope, all specifically designed to look for signatures of Inflation in the CMB.

Large clouds of hydrogen give off radio waves at a particular frequency.  Astronomers study the signal to weigh “nearby” galaxies and measure their motion through space.  To study the distant cosmic dark age, LEDA works with a custom radio telescope to identify corresponding signals from hydrogen generated at the end of the dark age, less than 100 million years after the Big Bang or less than  1% of the age of the universe. The signal will be very, very faint, but study will lay out how the first large-scale structures in the universe and the first small-scale structures–stars and black holes, formed.

To complement LEDA’s cosmic dark age research, scientists at the CFA Institute for Theory and Computation run simulations of the early Universe and how the first stars formed. After dark matter first clumped together, it attracted large clouds of hydrogen. When the clouds grew large enough, the heat and pressure from gravity started fusing the hydrogen, igniting the first star.

Simulations predict that these first stars were enormous, perhaps hundreds of times larger than our sun. Stars this size burn their fuel extremely quickly and die spectacularly in a supernova, sometimes leaving behind a black hole. These black holes may be the seeds of the supermassive black holes we now find in the center of large galaxies, including the Milky Way.

Studies into the Early Universe can provide meaningful insight into our origins, and scientists at the Center for Astrophysics are leading the way.

Looking Into The Distant Past

Inflation projected infinitesimal quantum fluctuations in the young Universe into cosmic scales, leaving some patches with a little more or a little less matter. These variations became the scaffolding for the structure of the Universe.

As the Universe expanded, the seething plasma of subatomic particles cooled to form hydrogen, the first atoms. Light was able to travel unimpeded through the Universe for the first time, a faint glow of radiation that permeates the entire Universe. This Cosmic Microwave Background (CMB) is the oldest observable source of light, a relic left over from when the Universe was only 380,000 years old.

Scientists believe the CMB still holds traces of Inflation, and with it, a window into the earliest moments of our Universe. Center for Astrophysics | Harvard & Smithsonian scientists are hard at work building and operating telescopes, like BICEP3, to observe the intricate features of this radiation, providing clues into the structure and history of the Universe.

While the theory of inflation is the most popular proposal, the Big Bang might in fact have a different origin. For example, in some other theories the Big Bang was a result of a bounce from a Big Crunch of the entire universe. Scientists at the Institute for Theory and Computation work to propose new methods of deciding which theory is correct through astrophysical observations and discovering the exact origin of the Big Bang from experiments. 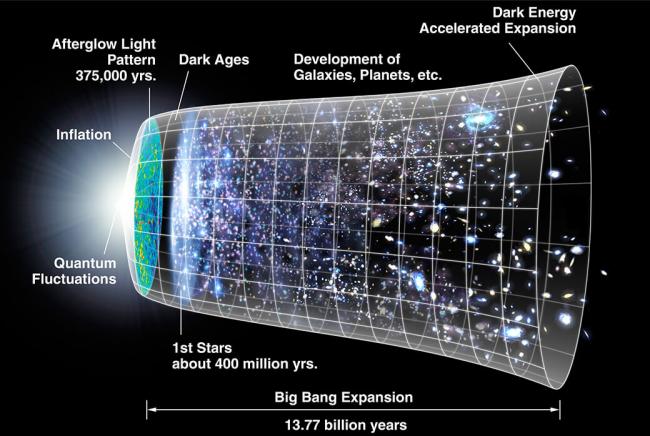 A depiction of the universe's 13.8 billion-year history, with the Big Bang at the left and the present day at the right. Researchers seek indirect ways to study the first instants of cosmic history, which are hidden from us.

After the Universe cooled sufficiently to allow atoms to form, what was once an incredibly hot and bright place turned cold and dark. Gravity slowly amplified tiny inhomogeneities in the distribution of gas, forming empty voids and massive clouds of hydrogen.  As gravity drove clouds to collapse further, they became peppered with something new – stars.  How long was it between the Big Bang and "cosmic dawn"?

Scientists hypothesize that unlike stars today, the earliest ones were massive and short-lived.  As generation after generation died, were black holes left behind in droves? Were these seeds for the supermassive singularities known to exist in the centers of galaxies today?  Scientists have no direct observations of this era with which to test hypotheses.  It is a literal and figurative “dark age.”

Center for Astrophysics | Harvard & Smithsonian scientists formulated the Large Aperture Experiment to Detect the Dark Ages (LEDA) in an effort to zero in on when the first stars and black holes formed, and to test cosmologists' hypotheses about conditions in the universe before stars.