With pliés and perfectly pointed toes, Xiaohan Wu explains the physics behind photons in the early universe. 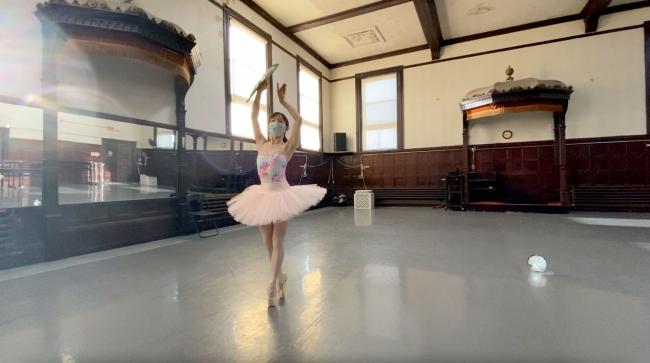 Donning pointe shoes and a poufy pink tutu, Xiaohan Wu gracefully leaps across the marled dance floor. She stoops, collects an intricate hand fan and proceeds to twirl, delicately waving the fan back and forth as she spins.

But this is not a recital and Wu is no dance student. She's a graduate astronomy student who has created an interpretative dance explaining her research on the early universe — and she's clearly got chops.

On Thursday, Wu was named the winner of the physics category of 'Dance Your PhD,' an international competition hosted by the American Association for the Advancement of Science (AAAS) and Science magazine. The competition challenges graduate students and those with PhDs to turn their complex doctoral theses into dances that the general public can understand.

The contest, now in its 14th year, is divided into four categories: biology, chemistry, physics and social sciences, and is judged by a panel of dancers, scientists and artists who watch a recording of the dance.

Wu, who is set to graduate this May, says she participated in the competition because it is her final year at the Center for Astrophysics | Harvard & Smithsonian.

"I just felt like I should do this video as a tribute to astronomy and as a proper end to my PhD," she explains.

During her time at the Center for Astrophysics, Wu studied the epoch of reionization, a period about 12 billion years ago when the first stars and galaxies began to form, lighting up the utterly dark universe.

In her choreographed dance, Wu plays one of many photons — or particles of light — that are emitted from the first star. As the photons begin to travel outwards from the star, they encounter a thick gas that contains neutral hydrogen atoms. These atoms act as a barrier, preventing the light from traveling further outwards.

But when a photon and hydrogen atom eventually interact — conveyed by Wu picking up a hand fan and twirling with it in the dance — the hydrogen atom loses an electron and becomes positively charged or ionized.

This small dance between the two particles is transformational for the early universe. Time after time, newly emitted photons from newly formed stars interact with neutral hydrogen atoms, allowing light to escape further and travel freely throughout the universe.

The result is a universe that is not cold, dark and neutral, but bright, ionized and hot.

The judges of 'Dance Your PhD' say this year's competition winners used movement creatively to clearly explain their research.

Wu, who loves ballet as much as she loves astronomy, learned to dance when she was very little but took a lengthy hiatus and only picked it up again a few years ago.

"I think it's just beautiful and I love seeing myself improve," she says.

After graduating in May, Wu will join the Canadian Institute for Theoretical Astrophysics as a postdoctoral researcher — and she plans to continue dancing.

"It happens to every amateur ballet dancer I've met,” she says. "Once you get into this business and start taking it seriously, there's no way out and you just take it more seriously over time."

Wu received assistance with choreography, props and filming from flamenco dancer and fellow astronomy student Ana Maria Delgado who jumped at the chance to help.

"Since beginning my PhD, I get very few opportunities to make art," Delgado says. "I, too, have danced most of my life and the truth is, we need to make art."

The two spent about two weeks choreographing the dance and storyline, practicing in the CfA's Phillips Auditorium in early January. A week later, they knocked out the filming in one afternoon.

"We came up with a very ambitious piece that Xiaohan worked so hard on and it came out beautifully," Delgado says. "This really is a labor of love and she deserves this prize!"

As winner of the physics category, Wu will receive a prize of $750.