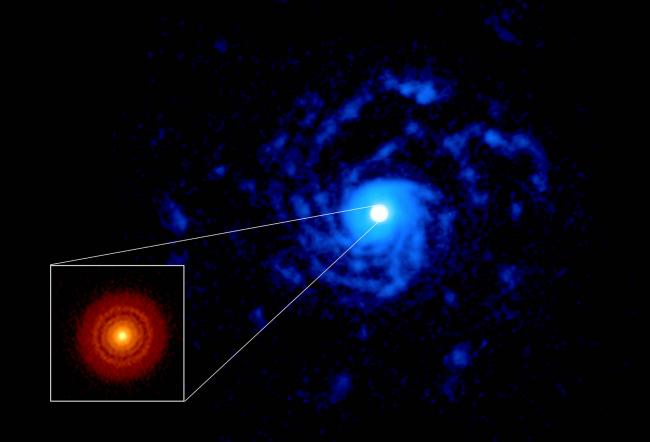 Cambridge, MA - Scientists at the Center for Astrophysics | Harvard & Smithsonian (CfA) announced today the discovery of a complex set of spiral arms extending to 1000 astronomical units from the young variable star, RU Lup. The discovery, published in The Astrophysical Journal, reveals new details concerning the size and structure of "planet factories," the protoplanetary disks of gas and dust surrounding stars where planets are born.

Observations at the Atacama Large Millimeter/Submillimeter Array (ALMA) in Chile previously produced high-resolution images of dusty disks with multiple rings and gaps hinting to the emergence of new planets, including in the dust disk surrounding RU Lup. But the new study, which focuses on gas in the disk rather than dust, revealed a more complex, less neatly-arranged structure, with an appearance similar to a "mini galaxy."

"We discovered a complex set of spiral arms in carbon monoxide (CO) emission extending to nearly 1000 astronomical units from the young star RU Lup, which has previously been found to exhibit signs of ongoing planet formation via concentric dust gaps in its protoplanetary disk," said Jane Huang, who led the paper as part of her PhD dissertation at CfA. "CO emission reveals complex structures in the planet-formation environment that are invisible in dust observations alone."

Protoplanetary disks have long been famous for the neat, organized rings seen in dust emission. RU Lup has previously been noted for its unusual stellar brightness variations, and according to Huang, these variations still have not been fully explained, though the new discovery adds another piece to puzzle. "The planet-forming environment can be much more complex and chaotic than implied by the numerous, well-known images of concentric ringed protoplanetary disks mapped in millimeter continuum emission," said Huang. "The fact that we observed this spiral structure in the gas after a deep observation suggests that we have likely not seen the full diversity and complexity of planet-forming environments. We may have missed much of the gas structures in other disks."

The observations, however, have offered more questions than answers about RU Lup, and the structure and behavior of other protoplanetary sources. Huang's team has considered multiple hypotheses as to how the spiral arms appeared around RU Lup, including whether the disk may be collapsing under its own gravity due to its significant mass, or whether it may be accreting interstellar matter through environmental interactions. "None of these scenarios completely explain what we have observed," said Sean Andrews, CfA astrophysicist, and co-author on the paper. "There might be unknown processes happening during planet formation that we have not yet accounted for in our models. We will only learn what they are if we find other disks out there that look like RU Lup."

While the primary focus of recent studies has been on mapping the distribution of solids in protoplanetary disks, Huang now believes that a full picture of planet factories requires a broader approach. "The RU Lup results show that some important information about the disk structure can only be identified through mapping the molecular emission. These results indicate that it will be important going forward to invest as much time in surveying molecular emission as has been invested in surveying dust emission."