Is Dark Matter Made of Primordial Black Holes? 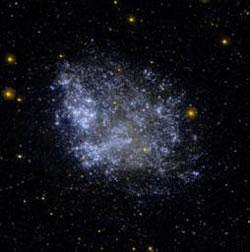 The dwarf irregular galaxy IC1613. Astronomers wondering whether primordial black holes might compose the dark matter in the universe suggest that the shapes of faint dwarf galaxies with dark matter halos might reveal the answer.

Astronomers studying the motions of galaxies and the character of the cosmic microwave background radiation came to realize in the last century that most of the matter in the universe was not visible. About 84% of the matter in the cosmos is dark matter, much of it located in halos around galaxies. It was dubbed dark matter because it does not emit light, but it is also mysterious: it is not composed of atoms or their usual constituents like electrons and protons.

Meanwhile, astronomers have observed the effects of black holes and recently even detected gravitational waves from a pair of merging black holes. Black holes usually are formed in the explosive death of massive stars, a process that can take many hundreds of millions of years as a star coalesces from ambient gas, evolves and finally dies. Some black holes are inferred to exist in the early universe, but there is probably is not enough time in the early universe for the normal formation process to occur. Some alternative methods have been proposed, like the direct collapse of primordial gas or processes associated with cosmic inflation, and many of these primordial black holes could have been made.

CfA astronomer Qirong Zhu led a group of four scientists investigating the possibility that today's dark matter is composed of primordial black holes, following up on previously published suggestions. If galaxy halos are made of black holes, they should have a different density distribution than halos made of exotic particles. There are some other differences as well - black hole halos are expected to form earlier in a galaxy’s evolution than do some other kinds of halos. The scientists suggest that looking at the stars in the halos of faint dwarf galaxies can probe these effects because dwarf galaxies are small and faint (they shine with a mere few thousand solar luminosities) where slight effects can be more easily spotted. The team ran a set of computer simulations to test whether dwarf galaxy halos might reveal the presence of primordial black holes, and they find that they could: interactions between stars and primordial halo black holes should slightly alter the sizes of the stellar distributions. The astronomers also conclude that such black holes would need to have masses between about two and fourteen solar masses, right in the expected range for these exotic objects (although smaller than the black holes recently spotted by gravitational wave detectors) and comparable to the conclusions of other studies. The team emphasizes, however, that all the models are still inconclusive and the nature of dark matter remains elusive.