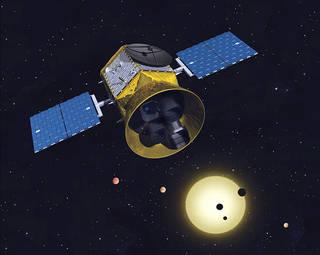 An artist's conception of TESS, the Transiting Exoplanet Survey Satellite, launched last year to search for planets beyond the solar system. Astronomers announced that TESS had found an ultra-short period "hot Earth" exoplanet around a nearby star.

The Transiting Exoplanet Survey Satellite (TESS) was launched on April 18 of last year with the primary objective of discovering transiting planets smaller than Neptune around stars bright enough for spectroscopic investigations of their masses and atmospheres. Before TESS there were roughly 385 exoplanets known with masses smaller than Neptune, with orbital periods ranging from less than half-a-day to about two Earth-years.

CfA astronomers Dave Latham, Samuel Quinn, Dave Charbonneau, Jonathan Irwin, Kristo Ment, Jennifer Winters, Martin Paegert, Dimitar Sasselov, and Willie Torres and a large team of TESS collaborators report that TESS has found a "hot Earth" exoplanet, rocky in composition, only about fifty light-years away and orbiting its dwarf star in a mere eleven hours. The planet has a radius of about 1.3 Earth-radii, enough to host an atmosphere, but its short orbital period means it lies very close to its star – only about seven stellar radii. The inferred surface temperature is about 800 kelvin, rather hot to be able to retain an atmosphere but possible. The scientists note, however, that if the planet had formed in roughly this close-in location, its atmosphere would likely have been stripped away in the star’s youth when it was more luminous and had more intense chromospheric activity. In any case, the planet's proximity to us offers the opportunity of characterizing any atmosphere it might have using transit and occultation spectra of the source and the result, interesting in its own right, would also shed light on the planet's formation.