Farthest Stars in Milky Way Might Be Ripped from Another Galaxy 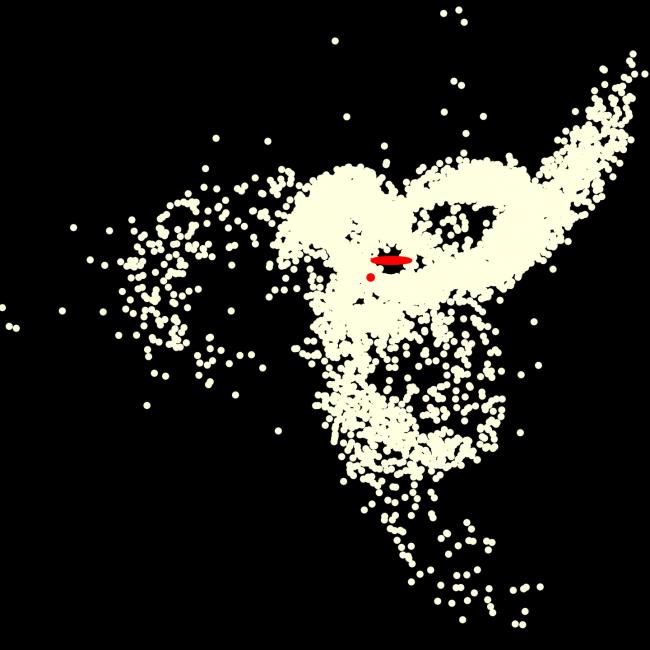 The 11 farthest known stars in our galaxy are located about 300,000 light-years from Earth, well outside the Milky Way's spiral disk. New research by Harvard astronomers shows that half of those stars might have been ripped from another galaxy: the Sagittarius dwarf. Moreover, they are members of a lengthy stream of stars extending one million light-years across space, or 10 times the width of our galaxy.

"The star streams that have been mapped so far are like creeks compared to the giant river of stars we predict will be observed eventually," says lead author Marion Dierickx of the Harvard-Smithsonian Center for Astrophysics (CfA).

The Sagittarius dwarf is one of dozens of mini-galaxies that surround the Milky Way. Over the age of the universe it made several loops around our galaxy. On each passage, the Milky Way's gravitational tides tugged on the smaller galaxy, pulling it apart like taffy.

Dierickx and her PhD advisor, Harvard theorist Avi Loeb, used computer models to simulate the movements of the Sagittarius dwarf over the past 8 billion years. They varied its initial velocity and angle of approach to the Milky Way to determine what best matched current observations.

"The starting speed and approach angle have a big effect on the orbit, just like the speed and angle of a missile launch affects its trajectory," explains Loeb.

At the beginning of the simulation, the Sagittarius dwarf weighed about 10 billion times the mass of our Sun, or about one percent of the Milky Way's mass. Dierickx's calculations showed that over time, the hapless dwarf lost about a third of its stars and a full nine-tenths of its dark matter. This resulted in three distinct streams of stars that reach as far as one million light-years from the Milky Way's center. They stretch all the way out to the edge of the Milky Way halo and display one of the largest structures observable on the sky.

Moreover, five of the 11 most distant stars in our galaxy have positions and velocities that match what you would expect of stars stripped from the Sagittarius dwarf. The other six do not appear to be from Sagittarius, but might have been removed from a different dwarf galaxy.

Mapping projects like the Sloan Digital Sky Survey have charted one of the three streams predicted by these simulations, but not to the full extent that the models suggest. Future instruments like the Large Synoptic Survey Telescope, which will detect much fainter stars across the sky, should be able to identify the other streams.

"More interlopers from Sagittarius are out there just waiting to be found," says Dierickx.

These findings have been accepted for publication in The Astrophysical Journal and are available online.