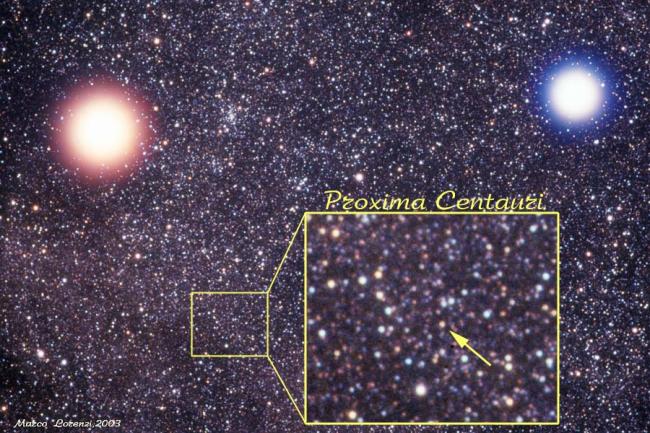 An image of the closest star to the Sun, star Promixa Centauri, and its surrounding field of stars. A new study of the flaring on Promixa Cen finds more magnetic activity that had been expected, with negative implications for its orbiting Earth-sized exoplanet, Proxima b.

Stellar magnetic activity presents a challenge to the habitability of planets around M dwarf stars, the most abundant type of star. These stars have relatively low masses and small radii that make them easier targets around which to spot transiting exoplanet signatures than solar-type stars. Moreover, recent statistical studies have concluded that half of M dwarf stars host an exoplanet between about 0.5–1.4 Earth-radii in size orbiting in or near the "habitable zone" (with an orbital period shorter than 50 days). For such exoplanets, surface magnetic activity on the star, such as related to starspots, X-ray or UV flares, present significant hazards to any atmosphere present, at least until the stars reach a few billion years in age and mature to a more quiescent phase.

Proxima Centauri, the closest star to the Earth at a distance of 4.28 light-years, hosts Proxima b, a 1.27 Earth-mass exoplanet orbiting within the star’s habitable zone. Proxima Cen is therefore an important benchmark object for understanding low-mass stars, their planet formation, the evolution of their magnetic dynamos, and the impact of stellar activity on planetary atmospheres. CfA astronomer Dimitar Sasselov and four colleagues used the Canadian microsatellite MOST (Microvariability and Oscillations of Stars) to study Proxima Cen with 37.6 days of monitoring. They detected sixty-six flare events, the largest number of white-light flares observed to date on this star. Although less than the rate seen in other flare stars of a similar type, Proxima Cen does have more activity than was expected from its slow rotation rate (slow rotators generally have less vigorous magnetic activity); the reason for the odd behavior of Proxima Cen is a mystery.

The team extrapolates their measurements to conclude that superflares - with energies comparable to the Sun's total luminous output in one second - occur in Proxima Cen about eight times per year, along with many more smaller but still significant flares. The results mean that transiting studies in Proxima Cen and similar M-dwarfs need to take even more careful account of the contributions of the various kinds of flares. The astronomers add that although their data cannot constrain the properties of so-called coronal mass ejections (i.e., winds) from Proxima Cen associated with its flaring, these eruptions may have a large negative impact on the habitability of its exoplanet, Proxima b.