Helium in an Exoplanet Atmosphere 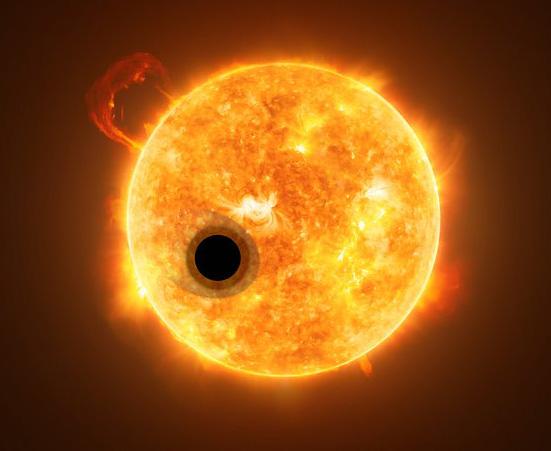 An artist's impression of the exoplanet WASP-107b. Scientists used Hubble observations of this object to obtain the first detection of helium in an exoplanetary atmosphere.

Helium is the second most abundant element in the universe, after hydrogen, and is a major constituent of the gas-giant planets in our Solar System. By contrast, helium is rare in the Earth's atmosphere, comprising less than about a thousandth of a percent of air. It is ten times less abundant even than neon, which cosmically is only the fifth most abundant element. The reason for the different relative planetary abundances of helium is thought to lie in their formation process: the gas giant planets formed in the colder outer part region of the young solar system which was rich in primordial gas, whereas the Earth formed closer in from rocky material, and to the extent that the Earth has any helium at all it comes from the radioactive decay of heavy elements in the Earth's rocks.

Helium is predicted to be among the most readily-detectable species in the atmospheres of exoplanets, especially in extended and escaping atmospheres. Searches for helium, however, have until now been unsuccessful. CfA astronomers Antonija Oklopcic, Laura Kreidberg, Jonathan Irwin, and David Charbonneau were among a team of astronomers reporting in this week’s Nature the first convincing detection of helium in an exoplanet, the warm gas giant WASP-107b. This object orbits its star every 5.7 days and is one of the lowest density planets known with a radius similar to that of Jupiter (about 94% of Jupiter’s size) but a much lower mass (only about 12%).

The team used the Hubble Space Telescope to detect a narrow absorption feature of helium in the infrared spectrum of WASP-107b during one its transits. The strength of the absorption signal suggests that this exoplanet has an extended atmosphere, and that it is evaporating at a rate that could be high enough to generate a comet-like tail. There is evidence that atmospheric mass loss can substantially alter the bulk composition of an exoplanet, and calibrating such possible effects is important for understanding the observations and the implications for its formation. The new measurements on WASP-107b provide important empirical evidence for these processes. The results also represent the first time an atmosphere was detected via an infrared spectral line.