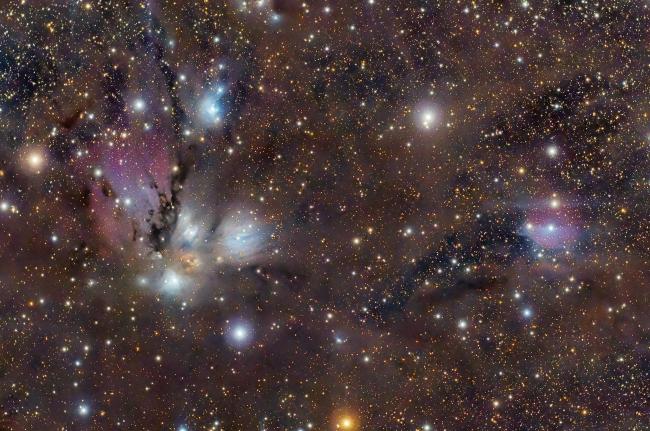 An optical image of the active star formation region in Monoceros. An obscured young star in the dark, dusty zone on the left has been discovered to contain the second known naturally occurring hydrogen maser.

Astronomers in the 1960s were amazed to discover that molecular clouds in interstellar space sometimes produced natural masers (the radio wavelength analogs of lasers) that shine with bright, narrow beams of radiation. Regions of active star formation generate some of the most spectacular such masers -- in one case the maser radiates as much energy in a single "color" (that is, a single spectral feature) as does our Sun in its entire visible spectrum. In these sources, the maser radiation comes from molecules like water or OH that are excited by collisions and
the radiation environment around the young stars. Masers are interesting in their own right, like lasers, but also because their
bright emission provides a powerful diagnostic probe of the regions of origin.

In 1989, maser emission from atoms of hydrogen gas was discovered around the star MWC349, a source with a disk of ionized material that is seen edge-on, and a bipolar outflow. The emission had some of the
characteristics of a molecular maser source: It was extremely bright, and it varied in time, the result of sensitivity to changes in the
detailed excitation processes. This maser source offered three other unique and valuable features. The first is that the excited atoms
produced a series of masers at a series of wavelengths from the corresponding set of hydrogen lines – some even at wavelengths short enough to be trumpeted as being natural lasers. The second is that the
numerous lines allowed scientists to model the emitting region in detail. It is an edge-on disk rotating in so-called Keplerian fashion,
that is, like the planets orbit in the solar system with those near the Sun orbiting faster than those far from the Sun (very different from the rotation of a solid disk). The final, mysterious point was that this first hydrogen maser source seemed to be unique. No one understands why, but despite decades of searching for other hydrogen maser sources, only two other possible examples have been proposed, though they remain uncertain at best. Until now.

CfA astronomers Izaskun Jimenez-Serra, Qizhou Zhang, Marion Dierickx, and Nimesh Patel, along with two colleagues, used the Submillimeter Array (SMA) to discover a new hydrogen maser source. It is much weaker than the maser in MWC349, but nonetheless shows the key maser characteristics. The scientists calculate that unlike the source in MWC349 the emission here is produced in a dense, collimated jet, but like MWC349 the maser emission is the result in part of our fortuitous viewing angle -- in this case, looking along the line-of-sight of the jet, a rare occurrence. Luck therefore seems to be one reason why so few hydrogen masers have been found. The astronomers add that because this source is quite weak, others like it would probably need similar high spatial resolution facilities to be detected. The new discovery, coming after twenty-four years of searching, helps scientists resolve why the earlier source was so unusual, and illustrates the rich complexity of physical processes at work in and around stars.