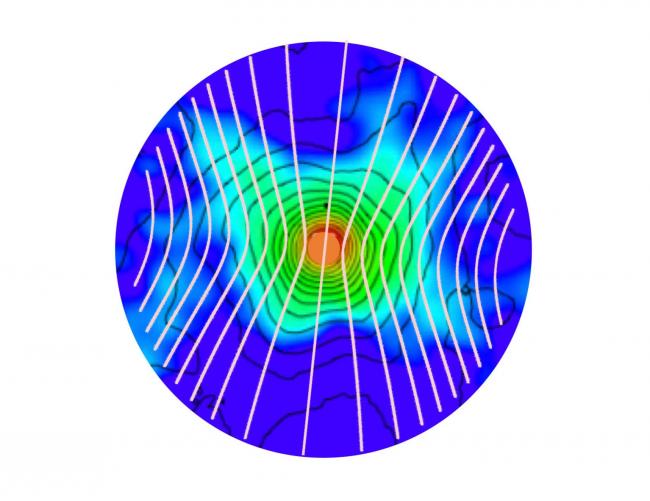 An image of the magnetized, star-forming core BHR 71 IRS1. The outermost low- density gas is shown by the blue and white background colors; the centrally concentrated core gas is shown by the black contour lines and green color. The central protostar and planet-forming disk are shown by the orange circle. The associated magnetic field lines are shown by the curved white lines, whose shape indicates that the field has been pulled inward by the contracting dense gas . Astronomers have completed the first analysis of magnetic field influences in star-forming cores using a combination of techniques.

Magnetic fields in space are sometimes called the last piece in the puzzle of star formation. They are much harder to measure than the masses or motions of star-forming clouds, and their strength is still uncertain. If they are strong, they can deflect or even oppose gas flowing into a young stellar core as it collapses under the influence of gravity. If they are moderate in strength, however, they act more flexibly and guide the flow, but don’t prevent it. Early measurements of field strengths in molecular clouds were based on radiation from molecules whose energy levels are sensitive to magnetic field strengths. Those data suggested the fields were of moderate strength, but those conclusions were tentative. More recent observations with stronger signals measured the polarized radiation from dust grains aligned with the magnetic field. These observations obtain the field strength from the changes in field direction across the cloud map.

CfA astronomer Phil Myers and his collaborator undertook to clarify the role of magnetic fields in star-forming cloud cores. They compared field strengths using the dust technique in 17 cores forming low mass stars and using the molecular technique in 36 cores forming more massive stars. The two techniques find nearly the same properties for the fields, despite each measuring a different magnetic effect. The astronomers analyzed whether the fields are strong enough to prevent gravitational collapse, and how their strengths scale with density. They find that, despite the diverse range of core properties, none of the fields is strong enough (by a factor of two or three) to prevent collapse. They also find correlations between field strength, density, and other core properties which are consistent with theoretical expectations. This study is the first analysis of magnetic field influences in star-forming cores using both molecular and dust measurement techniques, and it corroborates and extends the earlier findings based on the molecular technique alone.