A massive young star near the center of the Milky Way has developed mysterious spiral arms. 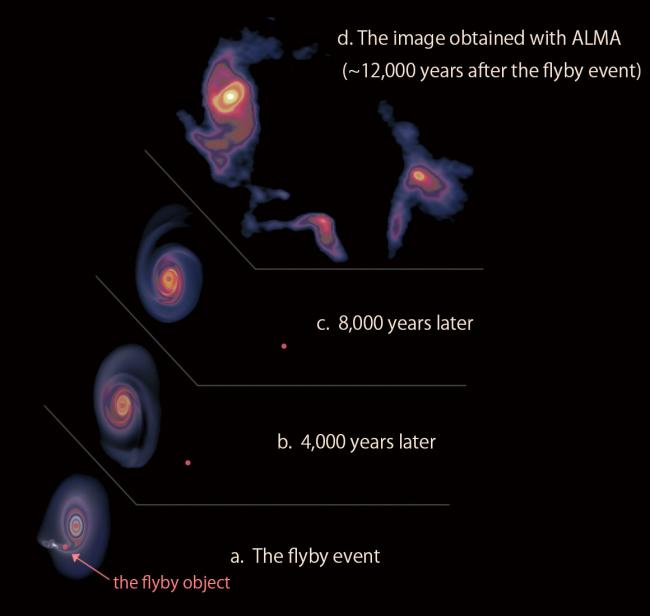 Cambridge, MA – An international research team from China, the U.S., and Germany, including Qizhou Zhang at the Center for Astrophysics | Harvard & Smithsonian, has used the ALMA Observatory and discovered an accretion disk with two spiral arms surrounding a young star near the center of the Milky Way galaxy.

The disk may have been disturbed by a close encounter with a flyby object, thus leading to the formation of the spiral arms, the team writes in a recent paper in Nature Astronomy.

Accretion disks around young stars, or protostars -- also known as 'protostellar disks' -- are essential components in star formation because they continuously feed growing stars gas from the surrounding environment. In this sense, they are stellar cradles where stars are born and raised. Accretion disks surrounding solar-like, low-mass protostars have been extensively studied in the last few decades, leading to a wealth of observational and theoretical achievements.

For massive protostars like the one observed in the study, especially early O-type ones of more than 30 solar masses, it is still unclear whether and how accretion disks play a role in their formation. These massive stars are far more luminous than the Sun, with intrinsic luminosities up to several hundreds of thousands of times the solar value, which strongly impact the environment of the entire galaxy. Therefore, understanding the formation of massive stars is of great importance.

The central region of the Milky Way, known as the Galactic Center, is about 26,000 light-years away from Earth and serves as a unique and important star-forming environment. The supermassive black hole Sagittarius A*, which sits at the very center of the Milky Way, is the most well-known object in the region.

In addition, there is a massive reservoir of dense molecular gas, mainly in the form of molecular hydrogen (H2), which is the raw material for star formation. The gas will start to form stars once gravitational collapse is initiated. However, direct observations of star-forming regions around the Galactic Center are challenging, given the considerable distance and the contamination from foreground gas between the Galactic Center and Earth. A very high resolution, combined with high sensitivity, is necessary to resolve details of star formation in this region.

For this study, the research team has used the long-baseline observations of ALMA to achieve a resolution of 40 milliarcseconds. With these high-resolution, high-sensitivity ALMA observations, the team discovered the accretion disk.

The disk has a diameter of about 4,000 astronomical units and is surrounding a protostar (specifically O-type star) of 32 solar mass.

What may be more interesting, the research team adds, is that the disk clearly displays two spiral arms. Such spiral arms resemble those found in spiral galaxies but are rarely seen in protostellar disks. Spiral arms could emerge in accretion disks due to fragmentation induced by gravitational instabilities. However, the disk discovered in this study is hot and turbulent, thus able to balance its gravity.

The team detected an object of about three solar masses at about 8,000 astronomical units away from the disk. Through a combined analysis of analytic solutions and numerical simulations, they reproduce a scenario where an object flew by the disk more than 10,000 years ago and perturbed the disk, leading to the formation of spiral arms.

"The numerical simulation matches perfectly with the ALMA observations. We conclude that the spiral arms in the disk are relics of the flyby of the intruding object," says Xing Lu, the lead author and an associate researcher at the Shanghai Astronomical Observatory of the Chinese Academy of Sciences.

This finding demonstrates that accretion disks at the early evolutionary stages of star formation are subject to frequent dynamic processes such as flybys, which would substantially influence the formation of stars and planets. It is interesting to note that flybys have also happened in our Solar System, the team says. A binary stellar system known as Scholz's Star flew by the solar system about 70,000 years ago, probably penetrating through the Oort cloud and sending comets to the inner solar system.

This study suggests that for more massive stars, especially in the high stellar density environment around the galactic center, such flybys should also be frequent.

"The formation of stars should be a dynamical process, with many mysteries still unresolved," says Lu. "With more upcoming high-resolution ALMA observations, we expect to disentangle these mysteries in star formation."

The Atacama Large Millimeter/submillimeter Array (ALMA), an international astronomy facility, is a partnership of the European Organisation for Astronomical Research in the Southern Hemisphere (ESO), the U.S. National Science Foundation (NSF) and the National Institutes of Natural Sciences (NINS) of Japan in cooperation with the Republic of Chile. ALMA is funded by ESO on behalf of its Member States, by NSF in cooperation with the National Research Council of Canada (NRC) and the Ministry of Science and Technology (MOST) and by NINS in cooperation with the Academia Sinica (AS) in Taiwan and the Korea Astronomy and Space Science Institute (KASI). ALMA construction and operations are led by ESO on behalf of its Member States; by the National Radio Astronomy Observatory (NRAO), managed by Associated Universities, Inc. (AUI), on behalf of North America; and by the National Astronomical Observatory of Japan (NAOJ) on behalf of East Asia. The Joint ALMA Observatory (JAO) provides the unified leadership and management of the construction, commissioning and operation of ALMA.