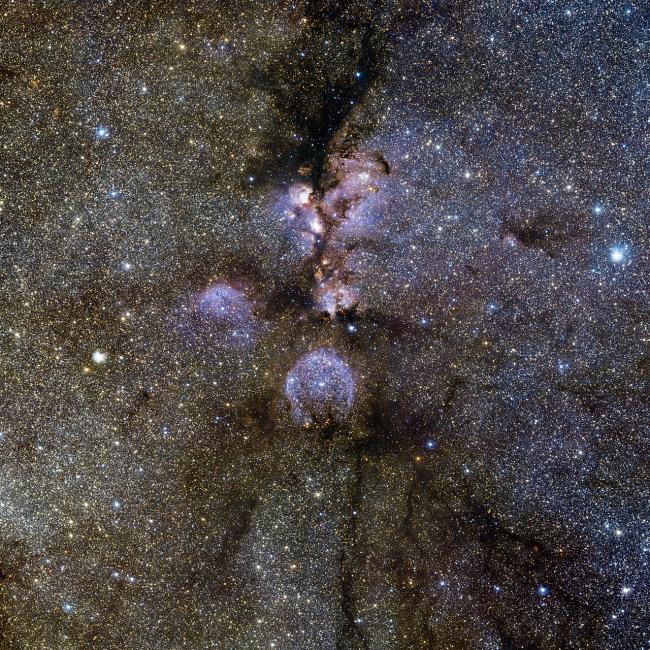 An infrared view of NGC6334, the Cat's Paw Nebula, a giant, star-forming molecular cloud. New submillimeter observations of the southern dark complex in this cloud have uncovered the first prestellar cores (embryos of future stars) ever found in a massive cloud, but they are very cold and cannot be seen in infrared images like this one.

Stars form as gravity contracts the gas and dust in an interstellar cloud until cores develop that are dense enough to coalesce into stars. A dense core in the earliest phase of this process is called a starless core, and if it has begun to collapse into a star the stage is referred to as a prestellar core. Prestellar cores can form single or multiple stars under the combined effects of gravity, magnetic fields, and turbulent motions, and understanding these and other properties of prestellar cores is critical to understanding star formation. Prestellar cores in low-mass molecular clouds have been intensively studied, partly because regions of low-mass star formation are relatively close by and comparatively bright. Star formation in massive cluster-forming regions might be quite different - many more massive stars are made there in processes that generally proceed more quickly - but studies of prestellar cores in such regions are very limited. As a result cold, quiescent prestellar cores in massive star-forming regions have not been clearly identified.

CfA astronomers Shanghuo Li, Qizhou Zhang, Howard Smith, and Shaye Strom were leaders of a team of astronomers that used the Atacama Large Millimeter/submillimeter Array (ALMA) to identify the first cluster of low-mass starless and prestellar cores in a massive complex. The infrared dark molecular cloud in which they were found, NGC6334S, is about four thousand light-years away and is part of a much larger complex with active massive star-formation. With a total mass of about 1300 solar-masses, NGC6334S has the potential to form both low-mass stars (each less than about two solar-masses) and high-mass stars (more than about eight solar-masses). Thus NGC6334S is an ideal laboratory to search for and study the prestellar phases of massive stars and clustered star formation.

The astronomers mapped the complex in the emission lines of molecules that trace cold dense gas. The ALMA results achieved a spatial resolution of about 0.07 light-years -- fine enough to identify individual cores in the complex. They discovered seventeen low-mass starless cores with masses ranging from about 0.13 to 0.87 solar masses, nine of which have enough mass to continue to contract and thus are prestellar cores. There are also numerous evolved young stars in the region which the team characterized. All of the cores are consistent with having dust temperatures of only about ten degrees kelvin, and none are detected in the infrared except at the longest, far-infrared and submillimeter wavelengths. These first detections of prestellar cores in a massive cloud complex reveal that the more massive cores are located towards the center of clouds; the less massive cores are spread throughout. Among the implications is support for the star formation model in which dense cores near the centers of clusters grow larger by accreting more material, in contrast to the alternative model in which the cores form with nearly their final masses.