For the first time, astronomers have retraced the history of our galactic neighborhood, showing exactly how the young stars nearest to our solar system formed. 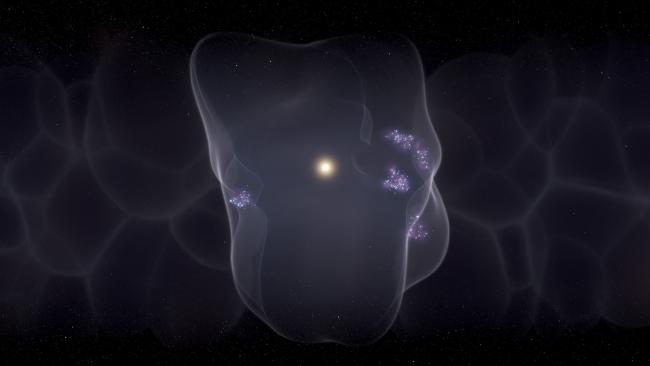 Cambridge, MA -- The Earth sits in a 1,000-light-year-wide void surrounded by thousands of young stars — but how did those stars form?

In a paper appearing today in Nature, astronomers at the Center for Astrophysics | Harvard & Smithsonian (CfA) and the Space Telescope Science Institute (STScI) reconstruct the evolutionary history of our galactic neighborhood, showing how a chain of events beginning 14 million years ago led to the creation of a vast bubble that’s responsible for the formation of all nearby, young stars.

"This is really an origin story; for the first time we can explain how all nearby star formation began," says astronomer and data visualization expert Catherine Zucker who completed the work during a fellowship at the CfA.

The paper's central figure, a 3D spacetime animation, reveals that all young stars and star-forming regions — within 500 light years of Earth — sit on the surface of a giant bubble known as the Local Bubble. While astronomers have known of its existence for decades, scientists can now see and understand the Local Bubble's beginnings and its impact on the gas around it.

The Source of Our Stars: The Local Bubble

Using a trove of new data and data science techniques, the spacetime animation shows how a series of supernovae that first went off 14 million years ago, pushed interstellar gas outwards, creating a bubble-like structure with a surface that's ripe for star formation.

Today, seven well-known star-forming regions or molecular clouds — dense regions in space where stars can form — sit on the surface of the bubble.

"We've calculated that about 15 supernovae have gone off over millions of years to form the Local Bubble that we see today," says Zucker who is now a NASA Hubble Fellow at STScI.

The oddly-shaped bubble is not dormant and continues to slowly grow, the astronomers note.

"It's coasting along at about 4 miles per second," Zucker says. "It has lost most of its oomph though and has pretty much plateaued in terms of speed."

The expansion speed of the bubble, as well as the past and present trajectories of the young stars forming on its surface, were derived using data obtained by Gaia, a space-based observatory launched by the European Space Agency.

"This is an incredible detective story, driven by both data and theory," says Harvard professor and Center for Astrophysics astronomer Alyssa Goodman, a study co-author and founder of glue, data visualization software that enabled the discovery. "We can piece together the history of star formation around us using a wide variety of independent clues: supernova models, stellar motions and exquisite new 3D maps of the material surrounding the Local Bubble."

"When the first supernovae that created the Local Bubble went off, our Sun was far away from the action," says co-author João Alves, a professor at the University of Vienna. "But about five million years ago, the Sun's path through the galaxy took it right into the bubble, and now the Sun sits — just by luck — almost right in the bubble's center."

Today, as humans peer out into space from near the Sun, they have a front row seat to the process of star formation occurring all around on the bubble's surface.

Astronomers first theorized that superbubbles were pervasive in the Milky Way nearly 50 years ago. "Now, we have proof — and what are the chances that we are right smack in the middle of one of these things?" asks Goodman. Statistically, it is very unlikely that the Sun would be centered in a giant bubble if such bubbles were rare in our Milky Way Galaxy, she explains.

Goodman likens the discovery to a Milky Way that resembles very hole-y swiss cheese, where holes in the cheese are blasted out by supernovae, and new stars can form in the cheese around the holes created by dying stars.

Next, the team, including co-author and Harvard doctoral student Michael Foley, plans to map out more interstellar bubbles to get a full 3D view of their locations, shapes and sizes. Charting out bubbles, and their relationship to each other, will ultimately allow astronomers to understand the role played by dying stars in giving birth to new ones, and in the structure and evolution of galaxies like the Milky Way.

Zucker wonders, "Where do these bubbles touch? How do they interact with each other? How do superbubbles drive the birth of stars like our Sun in the Milky Way?"

The articles, analyzed data (on the Harvard Dataverse) and interactive figures and videos are all freely available to everyone through a dedicated website.

The results were presented at a press conference of the American Astronomical Society (AAS) Wednesday afternoon. The public can watch a recording of the conference here.

About the Space Telescope Science Institute