A new strategy for tracing magnetized structures in 3D will help address key questions about the influence of magnetic fields in the cosmos. 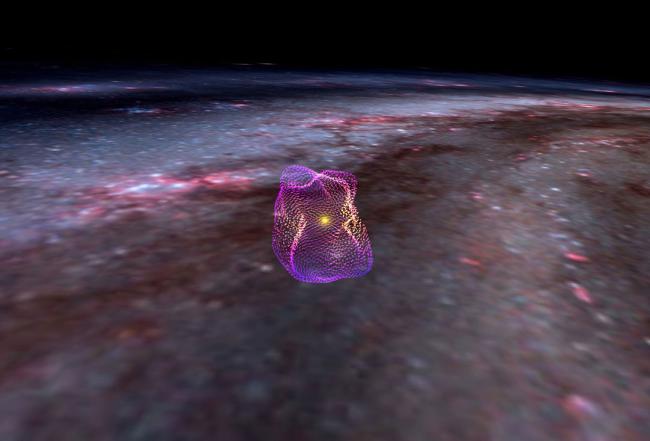 Seattle, WA – Astronomers at the Center for Astrophysics | Harvard & Smithsonian (CfA) have unveiled a first-of-its-kind map that could help answer decades-old questions about the origins of stars and the influences of magnetic fields in the cosmos.

The map reveals the likely magnetic field structure of the Local Bubble — a giant, 1,000-light-year-wide hollow in space surrounding our Sun. Like a hunk of Swiss cheese, our galaxy is full of these so-called superbubbles. The explosive supernova deaths of massive stars blow up these bubbles, and in the process, concentrate gas and dust — the fuel for making new stars — on the bubbles' outer surfaces. These thick surfaces accordingly serve as rich sites for subsequent star and planet formation.

Scientists' overall understanding of superbubbles, however, remains incomplete. With the new 3D magnetic field map, researchers now have novel information that could better explain the evolution of superbubbles, their effects on star formation and on galaxies writ large.

"Putting together this 3D map of the Local Bubble will help us examine superbubbles in new ways," says Theo O'Neill, who led the mapmaking effort during a 10-week, NSF-sponsored summer research experience at the CfA while still an undergraduate at the University of Virginia (UVA).

"Space is full of these superbubbles that trigger the formation of new stars and planets and influence the overall shapes of galaxies," continues O'Neill, who graduated from UVA in December 2022 with a degree in astronomy-physics and statistics. "By learning more about the exact mechanics that drive the Local Bubble, in which the Sun lives today, we can learn more about the evolution and dynamics of superbubbles in general."

Along with colleagues, O'Neill presented the findings at the American Astronomical Society's 241st annual meeting on Wednesday, Jan. 11, in Seattle, Washington. 3D interactive figures and a pre-print of the research are currently available on Authorea. The research was conducted at CfA under the mentorship of Harvard professor and CfA astronomer Alyssa Goodman, in collaboration with Catherine Zucker, a Harvard PhD astronomy alumna, Jesse Han, a Harvard PhD student and Juan Soler, a magnetic field expert in Rome.

"From a basic physics standpoint, we've long known that magnetic fields must play important roles in many astrophysical phenomena," says Goodman, who wrote her PhD thesis on the importance of cosmic magnetic fields thirty years ago. "But studying these magnetic fields has been notoriously difficult. The difficulty perpetually drives me away from magnetic field work, but then new observational tools, computational methods and enthusiastic colleagues tempt me back in. Today’s computer simulations and all-sky surveys may just finally be good enough to start really incorporating magnetic fields into our broader picture of how the universe works, from the motions of tiny dust grains on up to the dynamics of galaxy clusters."

The Local Bubble has emerged as a hot topic in astrophysics by virtue of being the superbubble in which the Sun and our Solar System now find themselves. In 2020, the Local Bubble's 3D geometry was initially worked out by researchers based in Greece and France. Then in 2021, Zucker, now of Space Telescope Science Institute, Goodman, João Alves of the University of Vienna, and their team showed that the Local Bubble's surface is the source of all nearby, young stars.

Those studies, along with the new 3D magnetic field map, have relied on data in part from Gaia, a space-based observatory launched by the European Space Agency (ESA). While measuring the positions and motions of stars, Gaia was used to infer the location of cosmic dust as well, charting its local concentrations and showing the approximate boundaries of the Local Bubble.

These data were combined by O'Neill and colleagues with data from Planck, another ESA-led space telescope. Planck, which carried out an all-sky survey from 2009 to 2013, was primarily designed to observe the Big Bang's relic light. In the process, the spacecraft compiled measurements of microwave wavelength light from all over the sky. The researchers used a portion of Planck observations that trace emission from dust within the Milky Way relevant to helping map the Local Bubble's magnetic field.

Specifically, the observations of interest consisted of polarized light, meaning light that vibrates in a preferred direction. This polarization is produced by magnetically aligned dust particles in space. The alignment of the dust in turn speaks to the orientation of the magnetic field acting upon the dust particles.

Mapping the magnetic field lines in this way enabled researchers working on the Planck data to compile a 2D map of the magnetic field projected on to the sky as seen from Earth. In order to morph or "de-project" this map into three spatial dimensions, the researchers made two key assumptions: First, that most of the interstellar dust producing the polarization observed lies in the Local Bubble's surface. And, second, that theories predicting that the magnetic field would be "swept up" into the bubble's surface as it expands are correct.

Goodman likens the research team to pioneering mapmakers who created some of the first maps of Earth.

"We've made some big assumptions to create this first 3D map of a magnetic field; it's by no means a perfect picture," she says. "As technology and our physical understanding improve, we will be able to improve the accuracy of our map and hopefully confirm what we are seeing."

The 3D view of magnetic whorls that emerged represent the magnetic field structure of our neighborhood superbubble, if the field was indeed swept-up into the bubble’s surface, and if most of the polarization is produced there.

The research team further compared the resulting map to features along the Local Bubble's surface. Examples included the Per-Tau Shell, a giant spherical region of star formation, and the Orion molecular cloud complex, another prominent stellar nursery. Future studies will examine the associations between magnetic fields and these and other surface features.

"With this map, we can really start to probe the influences of magnetic fields on star formation in superbubbles," says Goodman. "And for that matter, get a better grasp on how these fields influence numerous other cosmic phenomena."

Because magnetic fields only affect the movement and orientation of charged particles in astrophysical environments, Goodman says there has been a tendency to set aside the fields' influence when building simulations and theories where gravity — which acts on all matter — is the primary force at play. Further discouraging its inclusion, magnetism can be a fiendishly complex force to model.

This omission of magnetic fields’ influence, while understandable, often leaves out a key factor controlling motions of gas in the universe. These motions include gas flowing onto stars as they form, and flowing away from stars in powerful jets emanating from them as they gather matter into a planet-forming disk. Even if the effect of magnetic fields is miniscule from moment-to-moment in the low-density environments where stars form, given the millions-of-year timescales it takes to gather gas and turn it into stars, magnetic effects can plausibly add up to something substantial over time.

Goodman, O'Neill, and their colleagues look forward to finding out.

"I've had a great experience doing this research at CfA and assembling something new and exciting with this 3D magnetic map," says O'Neill. "I hope this map is a starting point for expanding our understanding of the superbubbles throughout our galaxy."

Support for this work was provided by the National Science Foundation, NASA, and the Gordon and Betty Moore Foundation.

About the 3D Milky Way Project

This research is part of an ongoing collaboration amongst several open-source software projects working together to create a 3D map of the Milky Way galaxy. The software packages, including glue, OpenSpace, and AAS WorldWide Telescope, are interconnected via API-like interfaces, and they access a wide variety of open data sets, including those from Planck and Gaia. Learn more about the 3D Milky Way project, which includes a collaboration with staff at the Hayden Planetarium at the American Museum of Natural History, where some results will be showcased, at MilkyWay3D.org. The 3D interactive figures in the Authorea preprint sharing this work are made possible via additional free software, including plot.ly and PyVista.