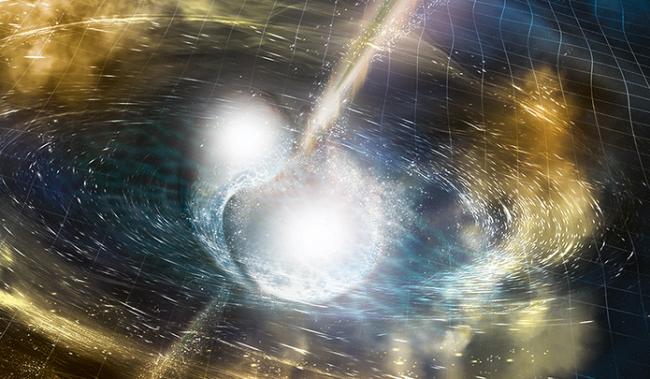 The single most important puzzle in today's cosmology (the study of the universe as a whole) can be summarized in one question: How old is it? For nearly a century -- since the discoveries by Einstein, Hubble, LeMaitre and others led to the big bang model of creation -- we have known the answer. It is about 13.8 billion years old (using current data). But in just the past decade the two alternative measurement methods have narrowed the uncertainties in their results to a few percent to reach a stunning conclusion: The two do not agree with each other. Since both methods are based on exactly the same model and equations, our understanding of the universe is somehow wrong -- perhaps fundamentally so.

Enter the most exciting technical achievement in astronomy for decades, the detection of gravitational waves (GW) caused by the mergers of black holes or neutron stars with each other by LIGO-Virgo, soon to be joined by other similar GW detection facilities in other countries. The solution to the cosmological dilemma is likely to be settled soon by these instruments according to a new Nature paper by Hsin-Yu Chen of Harvard's Black Hole Initiative, Maya Fishbach and Daniel E. Holz of the University of Chicago. The authors describe how upcoming detections of GW will have enough statistics to settle the question of age, forcing either one or the other (or perhaps even both) methods to re-think their basic understanding, or possibly even forcing a new variation of the When and How of the creation.

The two currently conflicting methods rely on observations of vastly different parts of the cosmic order. The first method measures and models the cosmic microwave background radiation (the CMBR method) produced by the universe when, after about 380,000 years, it cooled down and allowed neutral hydrogen atoms to form and light to propagate without scattering. The second method, the one used by Hubble and interpreted by LeMaitre, measures galaxies. This method takes advantage of the expansion of the universe to correlate a galaxy’s distance with its recession velocity, the so-called Hubble-LeMaitre Law, and to derive the Hubble-LeMaitre parameter which describes how long these galaxies have been in motion, related to the age of the universe. All astronomers today rely on this expression to obtain the distances to galaxies too far away to measure directly but whose velocities are easily seen in the Doppler shifts (the redshift) of their spectral lines. While the most familiar use of the parameter is to obtain the age of the universe, its value influences all the other parameters in the cosmological model (about nine of them) which together also explain the shape and expansion character of the universe.

Hubble calibrated his set of distances with nearby galaxies, but today we are capable of seeing galaxies so remote their light has been traveling to us for over ten billion years. Supernovae (SN), or at least those whose brightness is thought to be well understood, can be seen at great distances and so have been used to bootstrap the distance scale calibration outward from Hubble’s original neighborhood. There are subtle complexities in SN that are not well understood, however, resulting in an uncertainty that has been getting smaller as our understanding of them has improved. Today those uncertainties are small enough to exclude the comparable result from CMBR measurements.

The GW method of distance measurement is completely independent of both galaxy and CMBR methods. General relativity alone provides the intrinsic strength of the GW signal from its peculiar ringing signal, and its observed strength provides a direct measure of its distance. (The velocity information is obtained from the redshift of atomic lines in the host galaxy). Dr. Chen and her colleagues simulated 90,000 merger events in binary black hole or binary neutron star systems, including the host galaxy properties, and included likely selection effects and other complexities. The GW strength, for example, depends on our viewing angle of inclination of the merger, while the number of events to expect is only roughly constrained by the detections so far. Including these and similar uncertainties, the astronomers conclude that within the next five years it is likely that the GW method will fix the Hubble-LeMaitre parameter (that is, the age of the universe) to a precision of 2%, and to 1% in a decade, good enough to exclude one or even both of the other methods. The new paper's conclusions are bolstered by the fact that one paper using the GW method to estimate an age has already appeared. It had an uncertainty of between 11.9 billion years to 15.7 billion years, spanning both the current CMBR and galaxy values. But the new paper shows that in five years another roughly fifty GW events will be detected and these should be enough to settle the matter … and usher in a new era in precision cosmology.