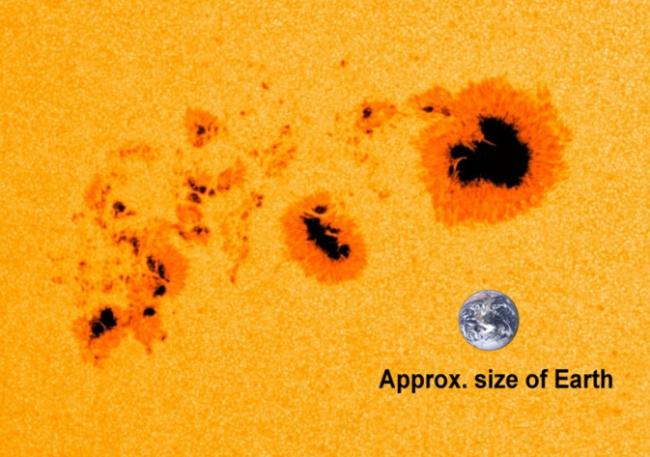 One of the largest sunspots in the last nine years as seen by NASA's Solar Dynamics Observatory. An image of Earth has been added for scale. Astronomers have used the Kepler satellite to characterize "starspots" on 2244 stars.

Sunspots are regions on the Sun's photosphere that appear darker than surrounding areas because they are cooler, usually by one or two thousand degrees Celsius. These spots are temporary phenomena caused by magnetic activity that results from the Sun's rotation and the complex circulation of hot gas below its surface, and they are accompanied by solar flares, mass ejections and other energetic phenomena. Other stars have similar regions, called starspots, and there have been some suggestions that in comparison the Sun is comparatively quiescent. Starspots are interesting to stellar astronomers because they are informed by the star’s rotation and circulation, details that are otherwise difficult to discern. Although starspots are too small to be imaged directly by current telescopes, they can be inferred from variations in a star's light.

CfA astronomer Raphaelle Haywood and two colleagues have analyzed archival data from the Kepler satellite to uncover some of the general properties of starspots. Kepler's primary goal was the detection of exoplanets from periodic variations in starlight due to transits, but its steady monitoring of starlight revealed many other temporal phenomena, including starspots. From a set of over thirty-four thousand main-sequence stars, the astronomers selected 2244 with rotation periods between 9.5 and 20.5 days. They were able to group the observed starspot behavior into three categories based on their persistence, and reached three significant conclusions. One is that our Sun is not unusually quiet. The others are that bigger starspots live longer, and that the starspots on cooler stars decay more slowly. The conclusions are consistent with current models of starspots, but this work is the first large-scale survey of the phenomenon.