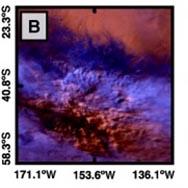 An image from the Mars Gobal Surveyor showing a "pebbled"-type dust storm. Astronomers have identified three kinds of textured dust storms on Mars, and in a study covering six years found that these textured storms have preferred seasons and locations.

Astronomers studying Mars first noted the presence of yellow clouds on its surface in the 1870's. Today these windblown dust storms on Mars are well known, and can span local, regional or even global in scale. Storms can display visible structures, sometimes periodic with wavelike features, or in other cases streaky or plume-like. Storms with structures are called "textured dust storms" and they result from strong winds or other meteorological effects that lift dust into the Martian atmosphere. In addition to obscuring views of the Martian surface, the dust can affect atmospheric heating and other climatic processes. These dust storms, despite having been studied for more than a century, remain rather mysterious. It is not understood, for example, how textured storms are distributed over the surface of the planet, when their frequency peaks, or how much dust is actually swept up.

CfA astronomer Huiqun Wang and two colleagues have been using the Mars Global Surveyor (MGS) images to analyze textured dust storms. Launched in 1999, MGS has provided about four Mars-years of daily global data that are particularly suitable for studying various aspects of clouds and dust storms. The new analysis focuses on the dust storms that occurred between May 1999 and October 2006, including a global dust storm in June 2001. There were 3955 textured dust storms during these periods. The scientists manually mark the position of each textured dust storm in the MGS image, and categorize its texture into one of three new categories they have developed: pebbled textures, characterized by a granular or crinkled appearance suggestive of strong turbulence, puffy textures with a bubbling appearance and cotton-like structures analogous to cumulus clouds indicative of vertical motions, and plume-like textures composed of multiple parallel elongated features suggestive of dust being uplifted and carried downstream by strong winds.

The scientists find that these three texture types have preferred seasons and distinctive locations; puffy storms, for example, tend to appear in the low latitudes and might therefore result from vertical convective winds there. Pebbled storms occur more frequently in the southern mid-latitudes implying that these zones are more turbulent than the northern mid/high-latitudes. The new results suggest links between storm texture type and meteorological conditions that can lead to improved understanding of the Martian climate.