The Ultraviolet Diversity of Supernovae 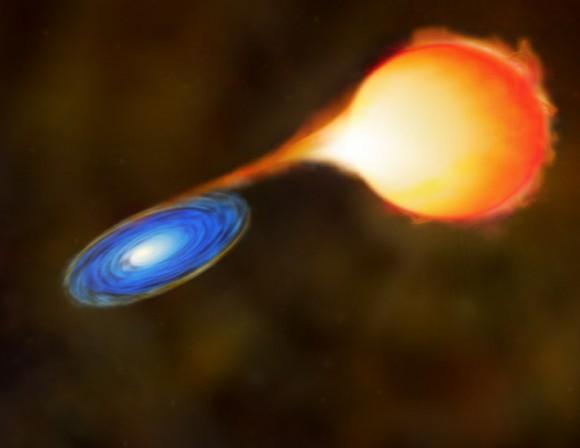 A Type Ia supernova occurs when a white dwarf star accretes material from a companion. Astronomers have completed the first thorough study of the short-wavelength ultraviolet spectra of supernovae.

Supernovae, the explosive deaths of massive stars, are among the most momentous events in the cosmos because they disburse into space all of the chemical elements that were produced inside their progenitor stars, including the elements essential for making planets and life. One class of supernovae (Type Ia) provides yet another benefit: these objects are considered to be standard distance candles. They result when enough material from an orbiting companion star falls onto the progenitor star to trigger it to explode.

Type Ia's are therefore used by astronomers to estimate the distances to remote galaxies whose supernovae appear faint because they are far away, and thus they calibrate the cosmic distance scale.

Astronomers have a pretty good physical understanding of how Type Ia supernovae work, but some significant questions remain, for example, about the nature of the companion star. A unique way to probe the physics of SN Ia explosions and progenitors is through their ultraviolet (UV) spectra. The UV can be used to probe directly the composition of the outermost layers of the supernova, layers which are transparent at optical wavelengths right after explosion. CfA astronomer Jerod Parrent and his colleagues have completed the first study of a complete sample of high-quality Type Ia spectra at very short UV wavelengths. They find that that there is significantly more spectral diversity in the UV than in the optical, and that the variations they find seem to correlate with the shape of the light-curve (the detailed way the supernova brightness changes with time), although there are no obvious physical connections. The astronomers produce a crude model based on their light-curve matching results that they can use to compare against future events. They expect that the differences between observed properties of supernovae and this model reflect differences in the energetics, chemistry, and/or morphologies.