Humans have done astronomy as long as we’ve been human, but telescopes were the single invention that most changed the way we studied the skies. From the first visible-light telescopes in the 1600s, new technology drove new discoveries, leading to 20th century invention of instruments capable of observing the types of light invisible to the human eye. Today, researchers continue to develop new telescopes and detectors to use with them, in the name of seeing farther and deeper, with greater precision than ever.

Center for Astrophysics | Harvard & Smithsonian astronomers use, build, and operate some of the most powerful telescopes in the world to do their research: 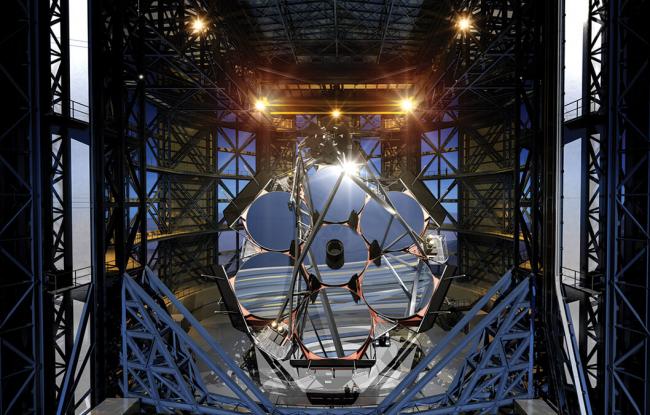 A realistic computer rendering of how the Giant Magellan Telescope (GMT) will look upon completion. The GMT will consist of seven 8.5-meter mirrors, along with advanced detector technology developed in part by CfA researchers.

For most of history, humans have been limited to what we can see with our eyes and measure with instruments such as astrolabes. The invention and spread of telescopes allowed astronomers to see farther, and to reveal greater detail in closer-by objects. The 19th century invention of photography provided a new way to observe without needing humans peering directly through a telescope eyepiece.

Today’s most powerful telescopes use giant mirrors to focus light onto detectors, replacing the human eye’s role with technology. In addition to allowing vision-impaired astronomers to work, modern telescopes and detectors are capable of seeing fainter astronomical sources and smaller details than at any previous period in history.

The use of detector technology and development of new types of telescopes also opened astronomy to the entire spectrum of light, most of which our eyes can’t see. High-altitude balloons, rockets, and spacecraft have allowed astronomers to put telescopes above the atmosphere, which blocks some kinds of light and scatters others.

The type of astronomy most people are familiar with is visible-light or optical astronomy. While it’s the most ancient, it’s still essential today, since that’s the part of the spectrum where stars emit most of their light. For that reason, visible light is important to study galaxies and detect exoplanets.

The Center for Astrophysics | Harvard & Smithsonian operate many optical telescopes, including the MMT in Arizona and the twin Magellan Telescopes in Chile. Each of these instruments is based on a mirror 6.5 meters (21 feet) across. The Giant Magellan Telescope (GMT) is currently under construction in Chile, and will combine seven large mirrors to make one giant mirror 22 meters (72 feet) across. Once completed, it will be the largest visible-light telescope in the world.

One of GMT’s projects will be follow-up observations of exoplanets discovered by NASA's Transiting Exoplanet Survey Satellite (TESS). TESS is an orbiting observatory consisting of multiple small telescopes, designed to hunt for planets across a huge swath of the sky. 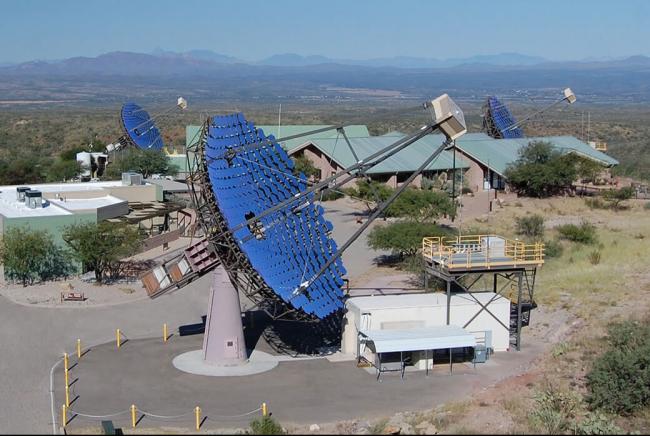 The four telescopes making up the Smithsonian’s Very Energetic Radiation Imaging Telescope Array System (VERITAS) also observe visible light, but ultimately they’re built for studying the highest energy radiation: gamma rays. These gamma rays can’t get all the way through the atmosphere to the ground, but when they strike the air, they produce a shower of blue light photons. VERITAS is designed to detect that blue light and reconstruct the gamma rays that made it. In that way, the observatory studies supernova remnants, the regions around black holes, and other extreme environments.

X-rays also don’t pierce Earth’s atmosphere, so astronomers put most X-ray telescopes on spacecraft. One of the most successful telescopes of any type is NASA’s Chandra X-ray Observatory, launched in 1999. This instrument has observed phenomena from the Solar System to literally across the universe.

Chandra’s telescope isn’t a normal mirror, since X-rays embed themselves in materials rather than bouncing off. Instead, X-rays require something known as “grazing incidence” mirrors, which are nearly parallel to the light the telescope takes in. The X-ray photons bounce off the surface like rocks skipping off a pond, which allows them to be focused onto a detector.

The wavelength of light largely determines the size of the telescope needed to create clear images. For that reason, radio and submillimeter light require the biggest telescopes to do precision astronomy. To increase their power further, astronomers build arrays of these telescopes, which work together like one giant virtual telescope.

The CfA’s Submillimeter Array (SMA) in Hawaii consists of eight dishes, each of which is 6 meters in diameter. This instrument is well suited for peering into dense clouds of gas and dust, which block visible light. The Atacama Large Millimeter/submillimeter Array (ALMA) in Chile is even larger, capable of studying star formation in very distant galaxies, among other things.

One of the most ambitious projects in astronomy is the Event Horizon Telescope (EHT), which is an array of multiple observatories stretching from Hawaii to the South Pole. These telescopes —including the SMA—worked together to create the first image of the black hole at the center of the nearby galaxy M87.