The Evolution of Massive Galaxy Clusters 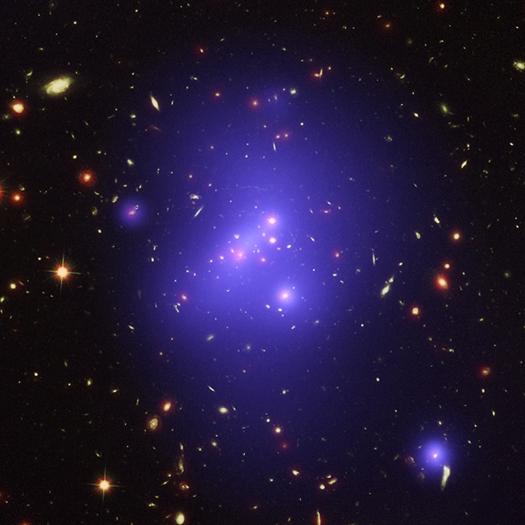 A multi-wavelength image of the distant massive galaxy cluster, IDCS J1426.5+3508 (X-rays from Chandra in blue, visible light from Hubble in green, and infrared data from Spitzer in red). A new millimeter wavelength study of massive clusters with the South Pole Telescope has found good agreement with current ideas about galaxy cluster evolution.

Galaxy clusters have long been recognized as important laboratories for the study of galaxy formation and evolution. The advent of the new generation of millimeter and submillimeter wave survey telescopes, like the South Pole Telescope (SPT), has made it possible to identify faint galaxy clusters over large fractions of the sky using an effect first recognized by Rashid Sunyaev and Yakov Zel’dovich in 1969: When hot electrons in the cluster gas interact with light from the ubiquitous cosmic microwave background they increase its brightness very slightly.

SAO is a partner institution in the South Pole Telescope, which has been conducting a large survey covering about six percent of the whole sky with a sensitivity and angular resolution suitable for spotting galaxy clusters as far away as those from the epoch about four billion years after the big bang. One advantage of studying this sample of clusters is that because they have been identified from their hot gas signatures (rather than from the starlight of their member galaxies), the evolution of the cluster and its ensemble population is easier to disentangle.

CfA astronomer Brian Stalder and a team of colleagues used the SPT survey data to identify twenty-six of the most massive clusters known, each with a mass of over about a million billion solar-masses. They find that the clusters are broadly in agreement with the current thinking about the evolution of massive clusters and the stars in these galaxies. The models suggest a generally passive evolution (that is, without unusual disruptions by collisions or nuclear black hole feedback) and imply that most of the star formation and galaxy merging took place at an even earlier epoch than this sample covers. The scientists note, however, that a larger sample is needed to extend the conclusions, and it is currently being undertaken using other large optical telescopes including the Magellan twin 6.5 meter telescopes in Chile of which SAO is also a leading partner.