Forming Stars in the Early Universe 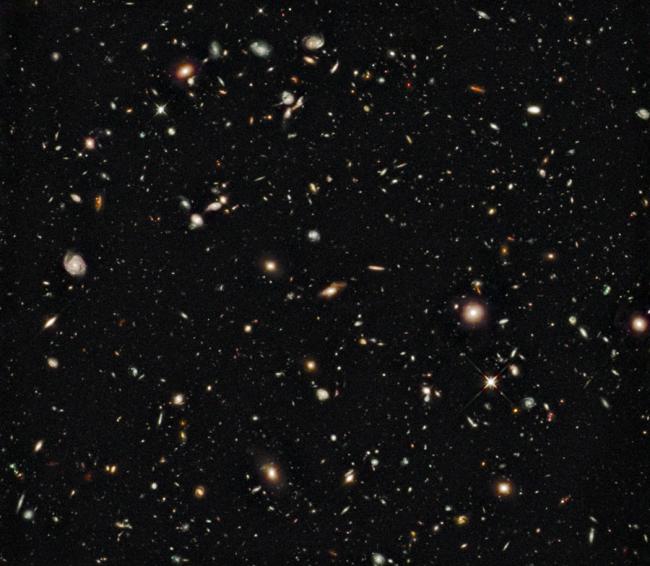 A Hubble image of a field of distant galaxies. A new study of the gas content in galaxies so distant their light has been traveling for about ten billion years suggests that the processes converting gas into stars is about the same back then as in the local universe.

The first stars appeared about one hundred million years after the big bang, and ever since then stars and star formation processes have lit up the cosmos. When the universe was about three billion years old, star formation activity peaked at rates about ten times above current levels. Why this happened, and whether the physical processes back then were different from those today or just more active (and why), are among the most pressing questions in astronomy. Since stars are made from gas, the gas content of galaxies is a measure of their star formation potential and (at least in the local universe) the fraction of matter in form of gas, the "gas fraction", is a measure of the star formation capability.

Gas in galaxies is depleted as new stars are formed and as some of it is blown out of the system by supernovae or by winds; gas can also be added by infall from the intergalactic medium. These processes are roughly understood in the local universe, mostly because the galaxies are bright and close enough to be studied in detail. For galaxies in the peak epoch of star formation, the evolution of the gas fraction is much less well constrained. Measuring the gas content is often done with observations of carbon monoxide, an abundant gas molecule, but in the early universe it is difficult to do because the distances make the lines faint, while the cosmic redshift pushes the usual diagnostic transitions to wavelengths that are beyond the capability of current facilities.

Francesca Civano and a team of her colleagues used the large ALMA millimeter facility to study the gas fractions in a set of forty-five massive galaxies in the cosmic epoch of peak star formation. Although the diagnostic emission lines from the gas were too faint to study, the team used the strong dust continuum as a proxy, arguing from other results that the ratio of gas to dust was reasonably well understood. The gas fractions for this set of galaxies were found to be quite similar to the values in other massive galaxies, which was somewhat of a surprise because some evolutionary trends in gas fraction had been expected. Their other important result is that the relationship between the gas fraction and star formation activity is in good agreement with current models and, according to the scientists, implies that a single star formation prescription applies from the local universe out to at least as early as the peak epoch about three billion years ago.