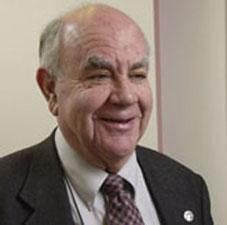 Giovanni Fazio has been awarded the 2015 Henry Norris Russell Lectureship for lifetime preeminence in astronomical research by the American Astronomical Society. Fazio's pioneering work on gamma-ray and infrared instrumentation has advanced our understanding in many areas of astronomy, ranging from near-Earth objects to high-redshift galaxies. Fazio is internationally recognized as a brilliant innovator and mentor. His leadership in the development of large balloon-borne telescopes for far-infrared astronomical observations paved the way to the success of the Spitzer Space Telescope, which has revolutionized the way we see and study the universe and for which Fazio serves as principal investigator on the Infrared Array Camera.

This award is the latest in a long string of recognitions. Dr. Fazio has received four NASA Group Achievement Awards, and in 1998 he received the Tsiolkovsky Medal from Russia's State Museum of the History of Cosmonautics. In 2005, he received the UNICO National Marconi Science Medal and the NASA Public Service Medal and in 2008, the Royal Society of London/COSPAR Massey Award (Gold Medal) for outstanding achievements in space science. In 2009 he was selected to receive the Secretary's Distinguished Research Lecture Award of the Smithsonian Institution.

Dr. Fazio received a B.S. degree in physics and a B.A. degree in chemistry from St. Mary's University, Texas, in 1954, and a Ph.D. in physics from the Massachusetts Institute of Technology in 1959. Fazio joined the Smithsonian Astrophysical Observatory (SAO) and the Harvard College Observatory in 1962. He is now a Senior Physicist at SAO.