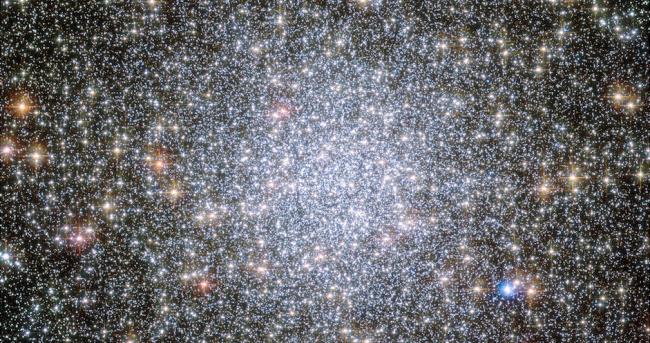 Globular star clusters are extraordinary in almost every way. They're densely packed, holding a million stars in a ball only about 100 light-years across on average. They're old, dating back almost to the birth of the Milky Way. And according to new research, they also could be extraordinarily good places to look for space-faring civilizations.

"A globular cluster might be the first place in which intelligent life is identified in our galaxy," says lead author Rosanne DiStefano of the Harvard-Smithsonian Center for Astrophysics (CfA).

DiStefano presented this research today in a press conference at a meeting of the American Astronomical Society.

Our Milky Way galaxy hosts about 150 globular clusters, most of them orbiting in the galactic outskirts. They formed about 10 billion years ago on average. As a result, their stars contain fewer of the heavy elements needed to construct planets, since those elements (like iron and silicon) must be created in earlier generations of stars. Some scientists have argued that this makes globular cluster stars less likely to host planets. In fact, only one planet has been found in a globular cluster to date.

However, DiStefano and her colleague Alak Ray (Tata Institute of Fundamental Research, Mumbai) argue that this view is too pessimistic. Exoplanets have been found around stars only one-tenth as metal-rich as our Sun. And while Jupiter-sized planets are found preferentially around stars containing higher levels of heavy elements, research finds that smaller, Earth-sized planets show no such preference.

"It's premature to say there are no planets in globular clusters," states Ray.

Another concern is that a globular cluster's crowded environment would threaten any planets that do form. A neighboring star could wander too close and gravitationally disrupt a planetary system, flinging worlds into icy interstellar space.

However, a star's habitable zone - the distance at which a planet would be warm enough for liquid water - varies depending on the star. While brighter stars have more distant habitable zones, planets orbiting dimmer stars would have to huddle much closer. Brighter stars also live shorter lives, and since globular clusters are old, those stars have died out. The predominant stars in globular clusters are faint, long-lived red dwarfs. Any potentially habitable planets they host would orbit nearby and be relatively safe from stellar interactions.

"Once planets form, they can survive for long periods of time, even longer than the current age of the universe," explains DiStefano.

So if habitable planets can form in globular clusters and survive for billions of years, what are the consequences for life should it evolve? Life would have ample time to become increasingly complex, and even potentially develop intelligence.

Such a civilization would enjoy a very different environment than our own. The nearest star to our solar system is four light-years, or 24 trillion miles, away. In contrast, the nearest star within a globular cluster could be about 20 times closer - just one trillion miles away. This would make interstellar communication and exploration significantly easier.

"We call it the 'globular cluster opportunity,'" says DiStefano. "Sending a broadcast between the stars wouldn't take any longer than a letter from the U.S. to Europe in the 18th century."

The closest globular cluster to Earth is still several thousand light-years away, making it difficult to find planets, particularly in a cluster’s crowded core. But it could be possible to detect transiting planets on the outskirts of globular clusters. Astronomers might even spot free-floating planets through gravitational lensing, in which the planet’s gravity magnifies light from a background star.

A more intriguing idea might be to target globular clusters with SETI search methods, looking for radio or laser broadcasts. The concept has a long history: In 1974 astronomer Frank Drake used the Arecibo radio telescope to broadcast the first deliberate message from Earth to outer space. It was directed at the globular cluster Messier 13 (M13).