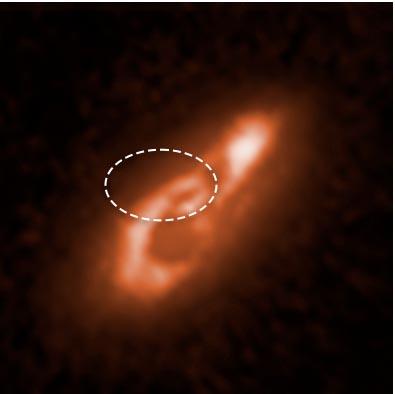 A digitally reprocessed Hubble image of a galaxy hosting a Fast Radio Burst (FRB). The oval region marks the area where the emission originated. Only a few FRBs repeat, making the identification of the source extremely challenging. A small number do repeat, however, and four host galaxies (like the one shown) have been spotted. Astronomers have recently identified and studied a fifth - the modestly star-forming galaxy host of a recently discovered FRB.

Fast radio bursts (FRBs) are bright pulses of emission at radio wavelengths (seen mostly at wavelengths of tens of centimeters) whose physical mechanism(s) are mysterious. The bursts last between hundredths of a millisecond to a few milliseconds, and none of them has been associated with a specific source, even though thousands of FRBs have been detected since the first one was spotted fourteen years ago. Equally puzzling is the fact that most FRBs do not repeat, one of the reasons why follow-up observations to identify the originating sources are so difficult. Nevertheless, a small minority of FRBs do repeat, and four of these "repeaters" have been found to originate within host galaxies whose environments include modest star formation, possibly a clue to the nature of the objects or environments responsible for them.

CfA astronomer Tarraneh Eftekhari was a member of a team that used the thirty-six telescope Australian Square Kilometre Array Pathfinder facility to detect five bursts from a new repeater, FRB 20201124A, and to identify its location within a faint galaxy about 1.5 billion light-years away. The team then used the Binospec instrument on the MMT — located at the Fred Lawrence Whipple Observatory in Amado, Arizona — to measure the optical spectrum of the host galaxy, as well as archival X-ray data on the galaxy from the Swift Observatory. Like the four previously identified hosts of FRBs, this galaxy exhibits an unremarkable, modest level of star formation with a rate of about five solar-masses of new stars per year (for comparison, the Milky Way makes about one per year). The host galaxy contains about twenty billion solar-masses in stars whose average age is relatively young, about five billion years old. It contains an abundance of warm dust, but no evidence of emission from a supermassive black hole nucleus. The new study demonstrates the advantage of using complementary tools to track down the origins of these mysterious radio bursts.