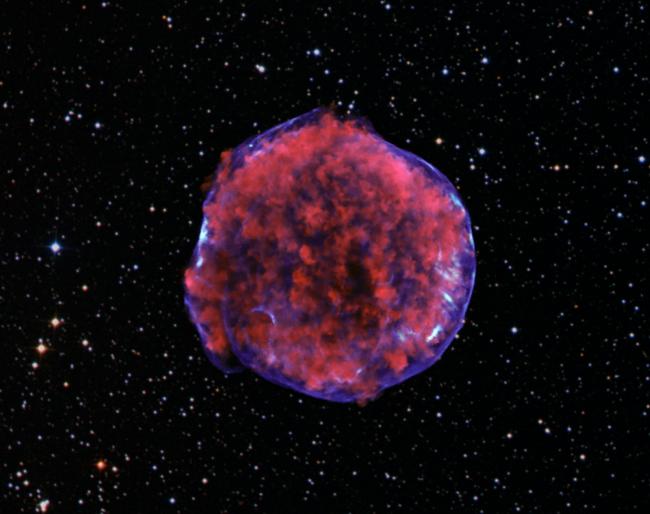 When a star explodes as a supernova, it shines brightly for a few weeks or months before fading away. Yet the material blasted outward from the explosion still glows hundreds or thousands of years later, forming a picturesque supernova remnant. What powers such long-lived brilliance?

In the case of Tycho's supernova remnant, astronomers have discovered that a reverse shock wave racing inward at Mach 1000 (1000 times the speed of sound) is heating the remnant and causing it to emit X-ray light.

"We wouldn't be able to study ancient supernova remnants without a reverse shock to light them up," says Hiroya Yamaguchi, who conducted this research at the Harvard-Smithsonian Center for Astrophysics (CfA).

Tycho's supernova was witnessed by astronomer Tycho Brahe in 1572. The appearance of this "new star" stunned those who thought the heavens were constant and unchanging. At its brightest, the supernova rivaled Venus before fading from sight a year later.

Modern astronomers know that the event Tycho and others observed was a Type Ia supernova, caused by the explosion of a white dwarf star. The explosion spewed elements like silicon and iron into space at speeds of more than 11 million miles per hour (5,000 km/s).

When that ejecta rammed into surrounding interstellar gas, it created a shock wave - the equivalent of a cosmic "sonic boom." That shock wave continues to move outward today at about Mach 300. The interaction also created a violent "backwash" - a reverse shock wave that speeds inward at Mach 1000.

"It's like the wave of brake lights that marches up a line of traffic after a fender-bender on a busy highway," explains CfA co-author Randall Smith.

"Thanks to the reverse shock, Tycho's supernova keeps on giving," says Smith.

The team studied the X-ray spectrum of Tycho's supernova remnant with the Suzaku spacecraft. They found that electrons crossing the reverse shock wave are rapidly heated by a still-uncertain process. Their observations represent the first clear evidence for such efficient, "collisionless" electron heating at the reverse shock of Tycho's supernova remnant.

The team plans to look for evidence of similar reverse shock waves in other young supernova remnants.

These results have been accepted for publication in The Astrophysical Journal.