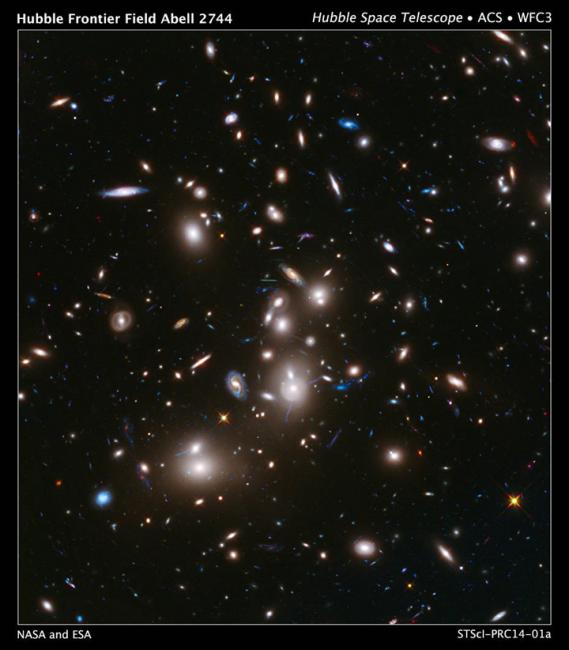 Abell 2744, a cluster of galaxies whose dark matter halo has imaged more distant galaxies as seen in this Hubble Space Telescope image. Astronomers have compared the image to simulations of dark matter lensing and found excellent agreement, indicating that that current models of dark matter behavior on the large scale are quite good.

Galaxies generally reside at the centers of vast clumps of dark matter called haloes because they surround the clusters of galaxies. Gravitational lensing of more distant galaxies by dark matter haloes offers a particularly unique and powerful probe of the detailed distribution of dark matter. So-called strong gravitational lensing creates highly distorted, magnified and occasionally multiple images of a single source; so-called weak lensing results in modestly yet systematically deformed shapes of background galaxies that can also provide robust constraints on the distribution of dark matter within the clusters.

CfA astronomers Annalisa Pillepich and Lars Hernquist and their colleagues compared gravitationally distorted Hubble images of the galaxy cluster Abell 2744 and two other clusters with the results of computer simulations of dark matter haloes. They found, in agreement with key predictions in the conventional dark matter picture, that the detailed galaxy substructures depend on the dark matter halo distribution, and that the total mass and the light trace each other. They also found a few discrepancies: the radial distribution of the dark matter is different from that predicted by the simulations, and the effects of tidal stripping and friction in galaxies are smaller than expected, but they suggest these issues might be resolved with more precise simulations. Overall, however, the standard model of dark matter does an excellent and reassuring job of describing galaxy clustering.