A Microlensing Event Seen from Three Positions in Space 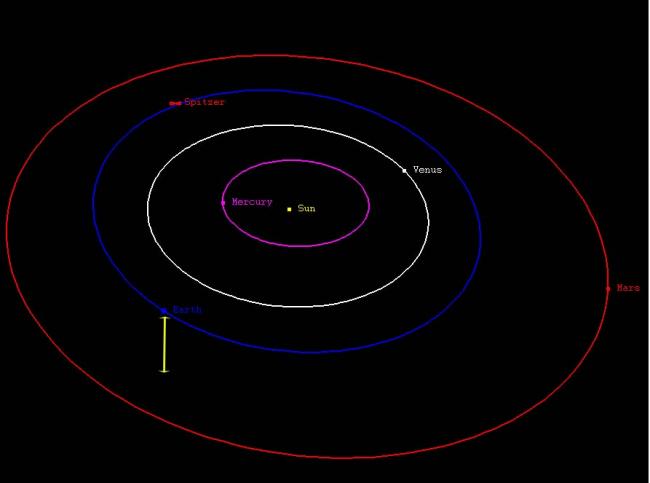 A graphic of the current orbital position of the Spitzer Space Telescope. Astronomers observed a microlensing event from three different locations in space - Spitzer, the Earth, and the Kepler K-2 satellite - and used them to measure for the first time, in principle without ambiguity, the mass and location of a microlensing body 77 Jupiter-masses in size.

The path of a light beam will be bent by the presence of mass, an effect explained by General Relativity, and a massive body can therefore act like a lens - a so called "gravitational lens" – to distort the image of an object seen behind it. Scientists first confirmed this prediction quantitatively during the now famous total eclipse of 29 May 1919 by observing starlight bent by the mass of the Sun. Microlensing is the name given to a related phenomenon: the short flash of light produced when a cosmic body, acting as a gravitational lens, changes the intensity of visible light from a more distant, background star as the body's motion fortuitously moves in front of it.

About thirty years ago, scientists predicted that if it ever became possible to observe a microlensing flash from two well-separated vantage points, a parallax measurement would pin down the distance of the dark object. The Spitzer Space Telescope is currently orbiting the Sun at the distance of the Earth but trailing the Earth at a location about one-quarter of the way around in its orbital path. A years ago, CfA astronomer Jennifer Yee led a team to make the first parallax microlensing measurement of a small stellar object using both Spitzer and ground-based telescopes. One complication was that measurements made with only two vantage points leaves a possible ambiguity in the result – but a three point measurement would eliminate that uncertainty.

In a new paper, Yee and a large team of her colleagues report the first microlensing event seen from three well-separated points: Spitzer, the Earth, and the Kepler “K2” mission, which has an orbit similar to that of Spitzer but which currently trails the Earth about one-sixth of the way around in its orbital path. The lensing object, known as MOA-2016-BLG-290, was determined from these measurements to be an extremely low mass star of about .07 solar-masses (seventy-seven Jupiter-masses), and situated about twenty-two thousand light-years away in our galaxy. The result, besides detecting an object intermediate in mass between a star and a planet, demonstrates the power of microlensing parallax measurements predicted decades ago.