A neutron star merger produced both gravitational waves and light. 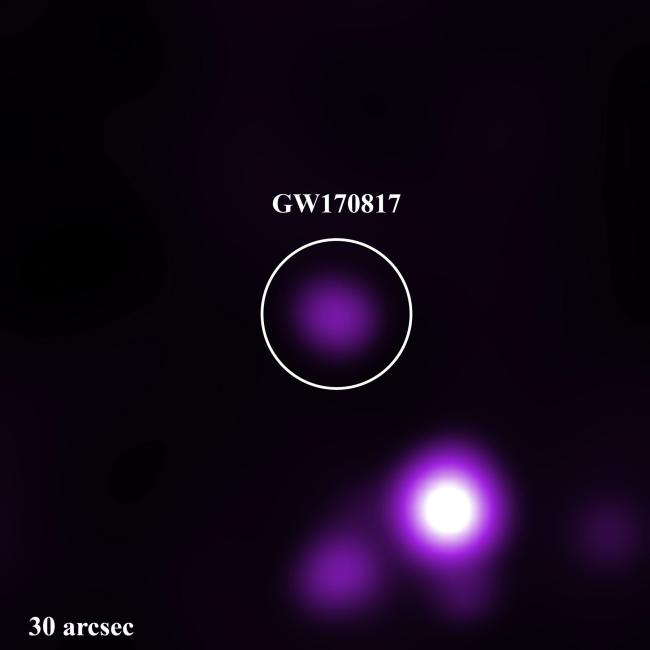 Cambridge, MA -- Astronomers may have detected a "sonic boom" from a powerful blast known as a kilonova. This event was seen in GW170817, a merger of two neutron stars and the first object detected in both gravitational waves and electromagnetic radiation, or light.

A kilonova occurs when two neutron stars – some of the densest objects in the universe – merge. On Aug. 17, 2017, astronomers — including researchers at the Center for Astrophysics | Harvard & Smithsonian — discovered gravitational waves from such a merger using the Advanced Laser Interferometer Gravitational-wave Observatory (LIGO) and Virgo, coinciding with a burst of gamma rays.

Since then, astronomers have been using telescopes all over the world and in space, including NASA's Chandra X-ray Observatory, to study GW170817 across the electromagnetic spectrum. Chandra is the only observatory still able to detect light from this extraordinary cosmic collision more than four years after the original event.

"We have entered uncharted territory here in studying the aftermath of a neutron star merger," says Aprajita Hajela of Northwestern University, who led a new study of GW170817 with Chandra; the findings were published this week in The Astrophysical Journal Letters.

Astronomers think that after neutron stars merge, the debris generates visible and infrared light from the decay of radioactive elements like platinum and gold formed in the debris from the merger. This burst of light is called a kilonova. Indeed, visible light and infrared emission were detected from GW170817 several hours after the gravitational waves.

The neutron star merger looked very different in X-rays. Right after the initial LIGO detection was announced, scientists requested that Chandra quickly pivot from its current target to GW170817. At first, they did not see any X-rays from the source, but on Aug. 26, 2017, Chandra looked again and found a point source of X-rays.

This non-detection of X-rays quickly followed by a detection provides evidence for a narrow jet of high-energy particles produced by the neutron star merger. The jet is "off- axis" – that is, not pointing directly towards Earth. Researchers think that Chandra originally viewed the narrow jet from its side, and therefore saw no X-rays immediately after the gravitational waves were detected.

However, as time passed, the material in the jet slowed down and widened as it slammed into surrounding material. This caused the cone of the jet to begin to expand more into Chandra’s direct line of sight, and X-ray emission was detected.

Since early 2018, the X-ray emission caused by the jet had steadily been getting fainter as the jet further slowed down and expanded. Hajela and her team then noticed that from March 2020 until the end of 2020 the decline stopped and the X-ray emission was approximately constant in brightness. This was a significant sign.

"The fact that the X-rays stopped fading quickly was our best evidence yet that something in addition to a jet is being detected in X-rays in this source,” says co-author Raffaella Margutti of the University of California at Berkeley. “A completely different source of X-rays appears to be needed to explain what we’re seeing."

A leading explanation for this new source of X-rays is that the expanding debris from the merger has generated a shock, like the sonic boom from a supersonic plane. The emission produced by material heated by the shock is called a kilonova afterglow. An alternative explanation is that the X-rays come from material falling towards a black hole that formed after the neutron stars merged.

To distinguish between the two explanations, astronomers will keep monitoring GW170817 in X-rays and radio waves. If it is a kilonova afterglow, the radio emission is expected to get brighter over time and be detected again in the next few months or years. If the explanation involves matter falling onto a newly formed black hole, then the X-ray output should stay steady or decline rapidly, and no radio emission will be detected over time.

"We have been able to study the properties of the kilonova using extensive optical and infrared observations in the first few weeks after the merger, but that light faded away quickly," says Edo Berger, study co-author and astronomer at the Center for Astrophysics. "Now we may have a second chance to explore the kilonova using X-rays, and in the near future potentially radio waves. Combining all of these data starting from hours after the merger to years later is certain to reveal new surprises."

The team recently announced a source was detected in new Chandra observations of GW170817 performed in December 2021. Analysis of that data is ongoing. No radio detection in association with the emerging X-rays has yet been reported.