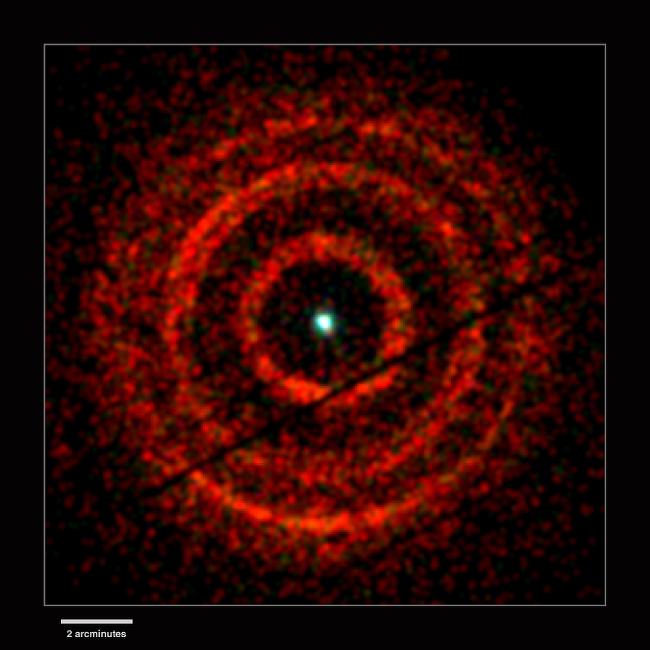 V404 Cygni is a binary star system in which a sun-like star is orbited by a black hole. X-rays are produced when the black hole's gravity pulls matter in from the normal star. In this X-ray image, V404 Cyg is the bright point source at the center and the bright rings are X-ray "echoes" produced by walls of dust. Astronomers have modeled the recent flare as a combination of eight discrete ejections.

A black hole X-ray binary (BHXB) is a black hole orbiting a normal star. When matter from the normal star accretes onto the black hole, a jet of charged particles is ejected at relativistic (near-light) speeds, and these particles emit strong X-ray radiation. The processes involved are thought to be similar to ones active under the more dramatic conditions in active galactic nuclei. Most known BHXBs are located in our galaxy, and being much closer to us they can be studied in more detail than their more distant cousins.

Black hole X-ray binaries occasionally flare in outbursts that can last days to weeks, offering an opportunity to probe how their jets evolve. Two different types of relativistic jets are known, depending on the accretion rate of mass in the system. At low mass accretion rates, the magnetic fields bend the compact jet, prompting it to emit radiation. At high accretion rates, discrete jet ejecta are launched that can interfere with this process in several ways, resulting in more complex emission characteristics. (A very rare third type of emission displays quasi-periodic oscillations.) There are usually a few bright BHXB events each year, but the more powerful kind occurs only about once a decade.

On June 15, 2015, the BHXB V404 Cygni underwent just such a rare, active outburst, and CfA astronomers Glen Petitpas and Mark Gurwell were members of a team that obtained simultaneous radio through submillimeter observations of the emission using the Submillimeter Array along with the Very Large Array and the James Clerk Maxwell Telescope (SCUBA-2). They tracked the activity over four hours, during which time they saw multiple, rapidly changing flares that were bright at all the frequencies they observed. The scientists best-fitting model worked well with eight discrete, bipolar, jet ejection events. The model also estimated the speed, structural properties, geometry, and energetics of the jets. These unprecedented coordinated observations of a BHXB highlight the importance of multi-band observations in studying BHXB jet emission.