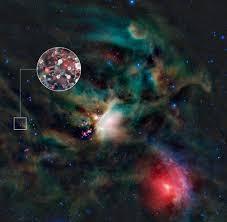 A false-color infrared image of the molecular cloud containing the young star IRAS16293-2422. The marked square shows the region where the star is located, and the insert illustrates its chemical richness. Astronomers used the ALMA facility to detect the first evidence in space of the pre-biotic chemical glycolonitrile (HOCH2CN).

Heterocyclic molecules are those containing atoms of at least two different elements (plus hydrogen) arranged in a ring structure. Nitrogen heterocycles are key components in biological nucleic acids, and in theories of the origins of biogenic molecules they were synthesized from abundant, simpler nitrogen molecules like hydrogen cyanide, HCN. Adenine, one of the four constituent bases of nucleic acids, is thought to have formed from one of the two known two-ring nitrogen heterocycles, glycolonitrile (HOCH2CN). In the cold interstellar medium of space, glycolonitrile could assemble on the surfaces of icy grain surfaces via reactions between formaldehyde (H2CO) and hydrogen cyanide. Astronomers have calculated that glycolonitrile could then be broken apart by ultraviolet light, leaving a variety of simpler nitrogen-bearing molecules, some of which have been detected in molecular clouds in space. Glycolonitrile itself, however, has not been reported leaving a step in the theory of the formation of nucleic acids unconfirmed.

CfA astronomer Rafael Martin-Domenech and his colleagues used the ALMA telescope facility to search for glycolonitrile in the young, solar-type protostar IRAS16293-2422B. This well-studied object lies about five hundred light-years in the constellation of Ophiuchus. It has a cold outer envelope of gas and dust and a hotter inner region heated by the star extending out to about a hundred astronomical units. Numerous, simpler organic molecules had already been seen in this warm zone. The team searched for the characteristic spectral signature of glycolonitrile in three frequency bands of ALMA, and found thirty-five of its transitions that were unambiguous. They modeled the data to reveal two components at two temperatures, about 24K and 158K, coming correspondingly from material in both the cold outer envelope of the star and its hotter inner zone. Their chemical analysis predicts a smaller abundance of the species than is actually seen, for both the cold and warm components, including under a variety of likely conditions including the cosmic ray ionization rate. The team concludes that some other chemical pathways must be operative, but that this critical chemical has now been measured and the theory is in general on the right track.