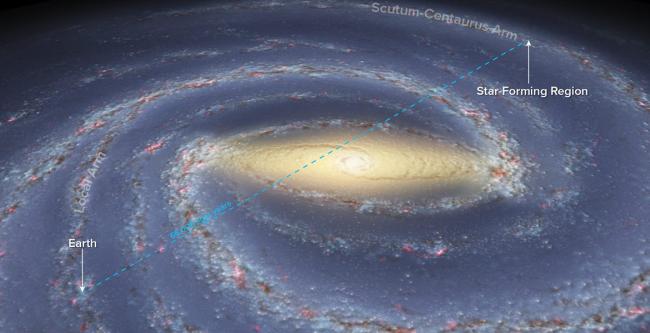 An artist's view of the Milky Way showing the relative positions of the Earth and a water maser star formation region on the far side whose distance has now been precisely determined by radio interferometric parallax techniques.

The size and shape of our home galaxy, the Milky Way, reflect not only its current structure but also its evolutionary history, providing details that form the basis for our understanding of all galaxies. The information is also important because it helps enable astronomers to determine distances to objects in the Milky Way relative to other object's distances. Distance is often the main uncertainty when calculating a star’s inherent (not apparent) luminosity, its mass, or other physical attributes. Conversely, knowing the precise distances to objects in the Milky Way enables astronomers to construct a coherent picture of the galaxy's size and shape. Currently, for many objects in the galaxy, and especially for molecular clouds and others not bright in the optical, astronomers determine distances by measuring their velocities and fitting them to a rotating model of the galaxy thus roughly associating velocities with the corresponding "kinematic" distances.

The distances to nearby stars are precisely and accurately determined using the technique of parallax. When a celestial body is seen from different, widely separated viewing points, its position with respect to more distant background stars or galaxies varies: this angular difference is its parallax. Parallax is used to triangulate the distances to stars by measuring their apparent angular shifts six months apart, when the earth is on opposite sides of its orbit around the Sun. This traditional technique has in the past worked mostly for nearby stars because their angular parallaxes are comparatively large and the stars are bright enough to be clearly seen, and hence easy to measure. The technique is so straightforward that astronomers have been trying for nearly a century (since the Milky Way was recognized to be a galaxy) to piece together a more complete picture using increasingly precise angular measurements.

CfA astronomers Mark Reid and Tom Dame and three colleagues have now succeeded in measuring precisely the distance to a source on the other side of the galaxy, a region that has so far been impossible to measure because it is so far away and also because it is heavily obscured by interstellar dust. The source is a water maser in the so-called Scutum-Centaurus Arm of the galaxy; a water maser provides laser-like radiation from a cloud of gas usually associated with active star formation regions. The astronomers used their ongoing radio program of Very Long Baseline Interferometry (VLBI) to observe the maser during 2014-2015. They measured the maser's position with respect to a very distant quasar, including correcting for the effects of motion of the source, and obtained a parallax angle of 0.000049 arcseconds (one arcsecond is the angular size of a dime at a distance of two kilometers). The corresponding distance is 66,500 light-years, with an uncertainty of about 14%. The results not only represent a new landmark in measuring the distance to galactic objects, they also enabled the team to confirm that the kinematic distance method is approximately correct, even in the far galaxy, and allowed them to trace one spiral arm of the galaxy around nearly one full revolution.