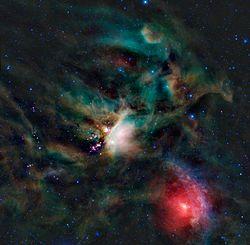 An infrared image of the star forming complex in Ophiucus. New results on a set of twenty-four nearby, clustered star formation regions find that low-mass stars in more compact locations form according to straightforward expectations, but in more diffuse regions some still uncertain combination of processes is active.

Most stars form in clusters of hundreds of stars. In contrast to isolated stars, whose formation is increasingly well understood by astronomers, the hows and whys of cluster formation are much less well understood. Issues include the structure of the cluster in its early stages and the physical processes that determine how it fragments into many stars. To address these questions, astronomers focus on observations of clusters of young protostellar objects, those early in their evolutionary lives. The molecular gas associated with these regions is used to reveal the densities and kinematics of the regions.

CfA astronomers Phil Myers, Mike Dunham, and Riwaj Pokhrel joined with colleagues to analyze twenty-four clusters, all closer than about three thousand light-years. The median diameter of these clusters is only about one light-year, and in an area of this radius they host on average about four protostars and one newly formed main-sequence star (for comparison, the nearest star to the Sun, Proxima Centauri, is 4.2 light-years away). Comparisons between the clusters reveal that continuous low-mass star formation often occurs over periods of several millions of years, much longer than the time it typically takes for a single star to become active. This result implies that many generations of stars are present in the cluster. The scientists also found that for the more compact clusters, characterized by sizes of about one light-year, the stars are separated by distances that agree well with simple theoretical expectations about fragmentation. For more diffuse groups, however, the protostellar separations are always larger than expected with the implication that other processes are at work.