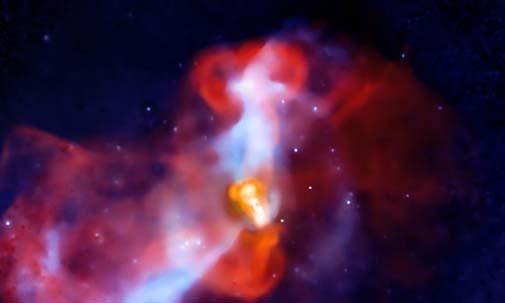 A composite image of M87 in the X-ray from Chandra (blue) and in radio emission from the Very Large Array (red-orange). Astronomers used the X-ray emission from M87 to constrain the properties of axions, putative particles suggested as dark matter candidates.

An axion is a hypothetical elementary particle whose existence was postulated in order to explain why certain subatomic reactions appear to violate basic symmetry constraints, in particular symmetry in time. The 1980 Nobel Prize in Physics went for the discovery of time-asymmetric reactions. Meanwhile, during the following decades, astronomers studying the motions of galaxies and the character of the cosmic microwave background radiation came to realize that most of the matter in the universe was not visible. It was dubbed dark matter, and today's best measurements find that about 84% of matter in the cosmos is dark. This component is dark not only because it does not emit light -- it is not composed of atoms or their usual constituents, like electrons and protons, and its nature is mysterious. Axions have been suggested as one possible solution. Particle physicists, however, have so far not been able to detect directly axions, leaving their existence in doubt and reinvigorating the puzzles they were supposed to resolve.

CfA astronomer Paul Nulsen and his colleagues used a novel method to investigate the nature of axions. Quantum mechanics constrain axions, if they exist, to interact with light in the presence of a magnetic field. As they propagate along a strong field, axions and photons should transmute from one to the other other in an oscillatory manner. Because the strength of any possible effect depends in part on the energy of the photons, the astronomers used the Chandra X-ray Observatory to monitor bright X-ray emission from galaxies. They observed X-rays from the nucleus of the galaxy M87, which is known to have strong magnetic fields, and which (at a distance of only fifty-three million light-years) is close enough to enable precise measurements of variations in the X-ray flux. Moreover, M87 lies in a cluster of galaxies, the Virgo cluster, which should insure the magnetic fields extend over very large scales and also facilitate the interpretation. Not least, M87 has been carefully studied for decades and its properties are relatively well known.

The search did not find the signature of axions. It does, however, set an important new limit on the strength of the coupling between axions and photons, and is able to rule out a substantial fraction of the possible future experiments that might be undertaken to detect axions. The scientists note that their research highlights the power of X-ray astronomy to probe some basic issues in particle physics, and point to complementary research activities that can be undertaken on other bright X-ray emitting galaxies.