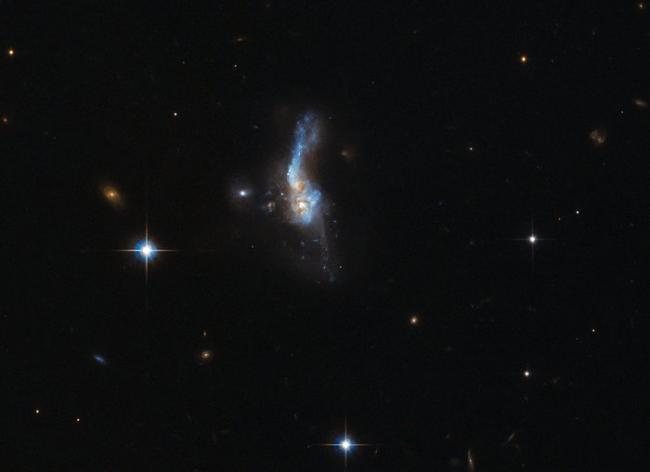 A Hubble image of an ultraluminous infrared galaxy in the relatively nearby universe. Astronomers studying ultraluminous galaxies in the remote, early universe have spotted one dating from the epoch only one billion years after the big bang and found, surprisingly, that is it similar to modern ones like this.

Galaxies with extremely high rates of star formation (from hundreds to thousands of solar-masses worth of stars per year) are rare. Our Milky Way, for example, makes only about one star a year. The process of star formation heats up dust to emit in the infrared, and extreme starburst galaxies that make this many per year shine so brightly they can be spotted at cosmological distances. When gravitational lensing by a fortuitously intervening galaxy or cluster of galaxies magnifies the signal, even farther away and cosmically earlier galaxies can be detected. To date only a handful of these extreme starburst galaxies have been confirmed from the universe’s first billion years of existence. Although still a small sample, they offer important insights into how stars were made at primordial times when most chemical elements were less abundant. They also help astronomers understand star formation in cases where the physical processes are so dramatic when compared to the process in our galaxy.

Far infrared and submillimeter sky surveys identified the first extreme galaxies from the emission of dust heated by their star formation activity. The rate of star formation is inferred from the luminosity of the galaxy, and this is calculated from the observed brightness and distance. As usual in astronomy, the distance parameter is key but difficult to measure. For these remote monsters it is generally obtained from the redshift of some strong lines emitted by the galaxy in the far infrared or submillimeter, typically from carbon monoxide (an abundant molecule) and/or from singly ionized atomic carbon.

CfA astronomer David Wilner was a member of a large team of astronomers that used the Large Millimeter Telescope Alfonso Serrano (LMT) in Mexico to followup the luminous galaxy G09_83808 that was first spotted in Herschel Space Observatory survey images; they also observed it with the ALMA facility to probe its spatial extent and with the Submillimeter Array to measure its carbon line. The spectral lines date the galaxy to about one billion years after the big bang, making it one of the first discovered whose unambiguous distance was that far away. Calculations of its star formation rate based on the luminosity corrected for effects of extinction and lensing find it to be about 380 solar-masses per year, comparable in fact to some of the ultra-luminous galaxies in our own cosmic era. This result implies that despite about twelve billion years of cosmic history, this galaxy is making stars in the same way as do extreme galaxies today. The object also has a relatively weak atomic carbon line, a characteristic also found (but still not well understood) to apply in luminous local systems. The new result also confirms that the early universe had luminous galaxies with physical processes that, although not well understood, appear to mirror closely local extreme cases.

A Microlensing Event Seen from Three Positions in Space