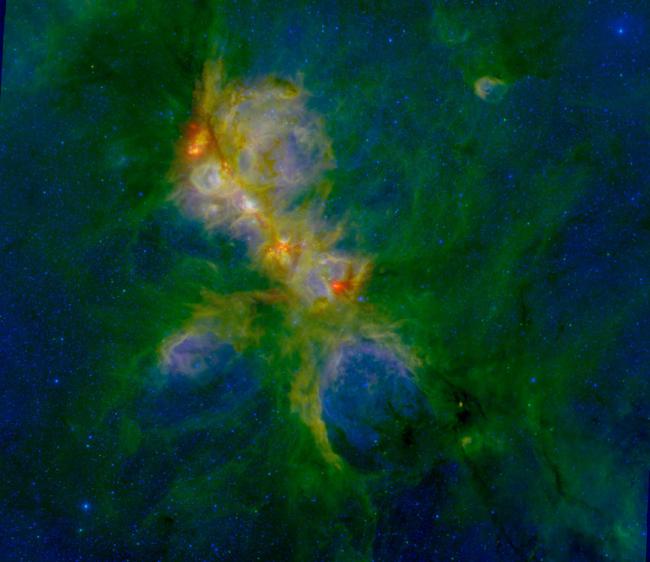 Although many of the details about star formation are vigorously debated, the general principles are reasonably well understood. Stars form as the gas and dust in a molecular cloud coalesces until, under the influence of gravity, clumps develop dense enough to become stars. Occasionally a cluster of young stars can develop with many massive, hot, bright members (the Pleiades is an example of such a young cluster). On average, in a typical galaxy like our Milky Way a few stars are born every year. Astronomers have discovered, however, that there are ultra-luminous galaxies in the universe that are powered by starbursts in which hundreds of stars are forming per year in massive clusters. Some of these galaxies are even found during the cosmic dawn, when the universe was young. Astronomers wonder what prompts such such extreme cases, how the star formation processes might differ from normal ones to trigger such dramatic birthing, and if the stars produced in such bursts differ (statistically speaking) from those produced in normal star birth?

One difficulty in studying starbursts in other galaxies is that they are so far away the individual stars are indistinguishable. There are some massive starburst regions in our own galaxy that provide a nearer example. One of them, NGC6334, a giant molecular cloud with over one hundred million solar masses of gas and dust, is located only about two thousand light-years away. Its relative proximity gives scientists the ability to study such a starburst up close. CfA astronomers Sarah WIllis, Giovanni Fazio, and Howard Smith, together with three colleagues, have measured the stellar population using the infrared IRAC and MIPS cameras on the Spitzer Space Telescope, combined with a set of ground-based observations.

By analyzing the infrared light, the team cataloged and characterized over 700,000 stars in NGC 6334, of which about 2283 are young - less than about a few hundred thousand years old. They are able to identify the ridges and filaments of material along which these youngest objects formed, finding that they stretch over tens of light-years in length and extend well beyond the densest ridges in the complex. The new work appears to signal that the the stars in the burst are not distinguishable in type or numbers from stars in more normal birth clouds. The team is currently extending their research to the far infrared wavelengths where they can probe even younger stars and refine their conclusions.